Available for just 8 credits, Shahbaz Ahmed is one to watch out for against the Bihar batsmen.

The Round 12 game of the Vijay Hazare trophy 2019 between Bengal and Bihar will be hosted by Sawai Mansingh Stadium, Jaipur.

Bengal and Bihar are pitted against one another as part of a Round 12 fixture in the ongoing Vijay Hazare Trophy 2019-20. While Bengal is firmly in the running for a knockout place, Bihar finds themselves at the bottom of the Elite Group C points table.

Bengal will consider themselves as the favourites for this game. Abhishek Raman has been the standout batsman for them with 291 runs in six matches. Their bowlers have also done well with Ishan Porel and Arnab Nandi consistently picking wickets for Bengal. Bihar, on the other hand, would depend on Ashutosh Aman and Babul Kumar to lead the way in their plight to give a tough fight to a formidable Bengal side.

A typically hot day is in the forecast with the temperatures ranging between 28 and 34 degrees Celsius. There should be no interruptions during the game with minimal cloud cover during the course of the game.

The Sawai Mansingh Stadium pitch should favour stroke play with the surface staying true to its nature. The relatively high average first innings score here provides comfort to both sets of batsmen. Pacers will enjoy extra bounce from the surface while chasing is the preferred option upon winning the toss.

Abhimanyu Easwaran has been a consistent performer for Bengal for the past few seasons. In spite of his record in the List A format, Easwaran hasn’t been able to get going this season. Ishan Porel picked a six-fer earlier in the tournament against Jammu and Kashmir. Since then he has faded a bit but should be able to bounce back against Bihar. From the Bihar roster, Ashutosh Aman’s ability to pick wickets and also score vital runs down the order makes him a worthy option.

In spite of his ever-growing reputation, Abhimanyu Easwaran is yet to hit his strides and is due for a big one in the tournament. 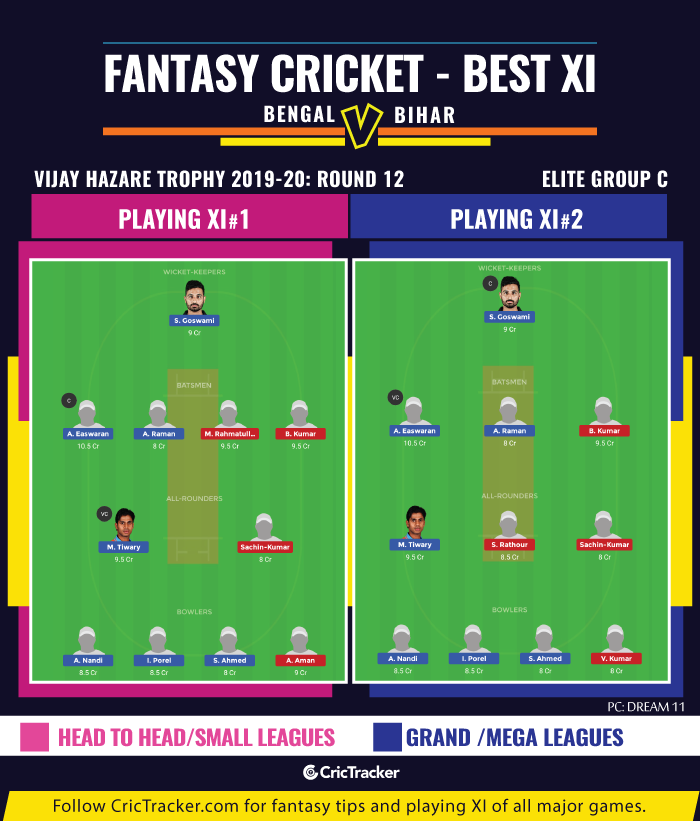 If Bihar were to bat first, top order Bengal batsmen would be the key with the likes of Abhimanyu Easwaran and Abhishek Raman expected to make short work of them.

Shahbaz Ahmed has been one of the standout players for Bengal with the allrounder also scoring a hundred earlier in the tournament. Available for just 8 credits, Shahbaz Ahmed is one to watch out for against the Bihar batsmen.

Owing to their clear advantage in terms of talent and experience, Bengal should register an easy win over Bihar.