Prasanth Kumar has scored three fifties from seven innings this season and will be a safe option as a vice-captain for this game.

The Round 13 match in the Elite Group A of the Vijay Hazare Trophy 2019-20 will be played between Andhra and Kerala at the Alur Cricket Stadium 3 in Bangalore.

Kerala were sky-high after their big win against Goa last Saturday thanks to a record 212* from Sanju Samson. That happiness didn’t last long for Kerala as they were given a reality check by Mumbai on Monday. The top three tried to score at a quick rate but didn’t bother the wickets column. As a result, there scored 57 in first 10 overs but lost three wickets. They eventually bowled out for 199 after batting 48.4 overs.

Though Kerala’s bowling performances were consistent, they couldn’t break the big opening stand of Mumbai. They finally got breakthroughs when Mumbai were five runs away from a win. In a do-or-die scenario for the quarter-finals, Kerala will face Andhra on Wednesday. Andhra has been quite poor as a team in this season. Hanuma Vihari’s absence seems to be playing on the mind of the Andhra team.

Thunderstorms are predicted in Alur from 2 PM local time. We might have at least 60 overs of play completed by that time. So chances of a result could depend on overrates and weather’s uncertainty from the afternoon.

The Alur Ground 3 has recorded decent totals in this tournament so far. The last two games have been of 20 overs and both saw totals of 171 by the batting first side. We could have a successful 250+ chase on Wednesday if the weather permits a full 50-over fixture.

KS Bharat retired hurt during the game against Hyderabad and is unlikely to feature in this match.

Vishnu Vinod had his issues of converting the 30s and 40s in the past. But he has scored two hundreds this year and also a fifty. Vinod even picked a couple of wickets in the last game. Girinath Reddy is capable of scoring 30s and 40s low down the order and pick a couple of wickets. Jalaj Saxena didn’t play much this season due to BP’s XI commitments. He is expected to make a mark in this crucial time. Yarra Prithviraj has taken 13 wickets in only five innings he bowled in this tournament.

Prasanth Kumar has scored three fifties from seven innings this season. He has scored 312 runs at an average of 62.4 thus far. He will be a safe option as a vice-captain for this game. 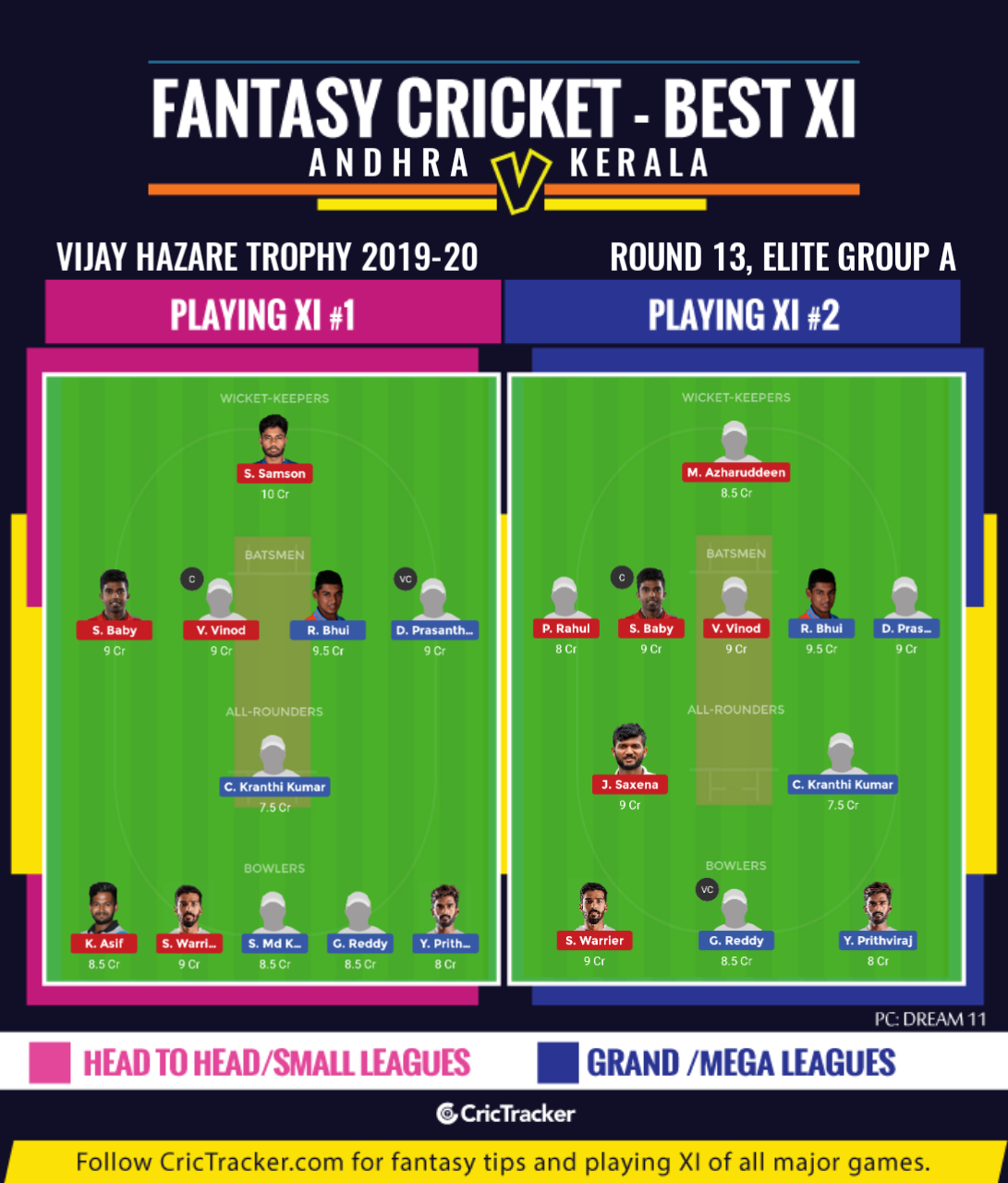 Sanju Samson’s double ton against Goa was his maiden List A hundred. He hasn’t scored consistently in this format. Robin Uthappa has had a woeful year with the bat and it is the reason we have not considered the Kerala skipper in our suggested XIs.

Kerala’s pace attack is expected to be deciding factor in this match.