All-rounders are the key on this surface with this being a good track to bat on.

The Round 2 game of the Vijay Hazare Trophy 2019 between Baroda vs Uttar Pradesh will be hosted by Darshanam Sports and Education Academy, Vadodara

The match starts at 9:00 AM local time (IST) (3:30 AM GMT). This game will be live on Star Sports. Streaming available on Hotstar

In one of the marquee clashes in Round 2, Baroda take on a youthful Uttar Pradesh side in a bid to get their campaign up and running. Baroda’s first game was scheduled on Tuesday while this is UP’s first taste of the Vijay Hazare Trophy action this year. On paper, Baroda boasts of explosive talents such as Krunal Pandya, Deepak Hooda and Yusuf Pathan.

They also have a capable bowling unit led by Rishi Arothe although he will have has his hands full against a very talented UP batting unit led by Samarth Singh. Complemented by IPL regulars, Rinku Singh and Akshdeep Nath, Samarth Singh looks to lead his side to victory in spite of entering this game as slight underdogs. Considering the nature of the pitch and players involved on either side, a cracking game awaits from Vadodara.

Rain could play spoilsport for this game as well with the chances of this match completing being bleak. A cloud cover of 78% and humidity of 84%, as per AccuWeather, is predicted at the start of the match with the temperature ranging from 27-32 degrees over the course of the game.

Although there haven’t been many matches played at this venue, run-scoring should be relatively easier for both sets of batsmen. The relatively smaller dimensions of the ground go against the spinners although they should extract some turn from the surface.

Deepak Hooda is one of Baroda’s best batsmen with the SRH allrounder consistently scoring runs in the middle overs for them. With Hooda now set to bat at number four, he is bound to make an impact against the spin threat of Uttar Pradesh

Samarth Singh was a standout player in the last season for UP with the opener scoring 385 runs in the Syed Mushtaq Ali Trophy. With the mantle of captaincy also upon his shoulders, Singh’s battle with Arothe and Meriwala will be crucial in the context of the game.

Baroda captain, KrunalPandya fits the bill for the pitch with the allrounder enjoying a stellar season last time around with 285 runs and 11 wickets to his name. Against a couple of left-arm spinners in UP’s side, he could promote himself up the order as well, if required.

Krunal Pandya’s superior skill-set in terms of batting and bowling should earn double the points, making him a better option than fellow Baroda team-mate, Deepak Hooda. 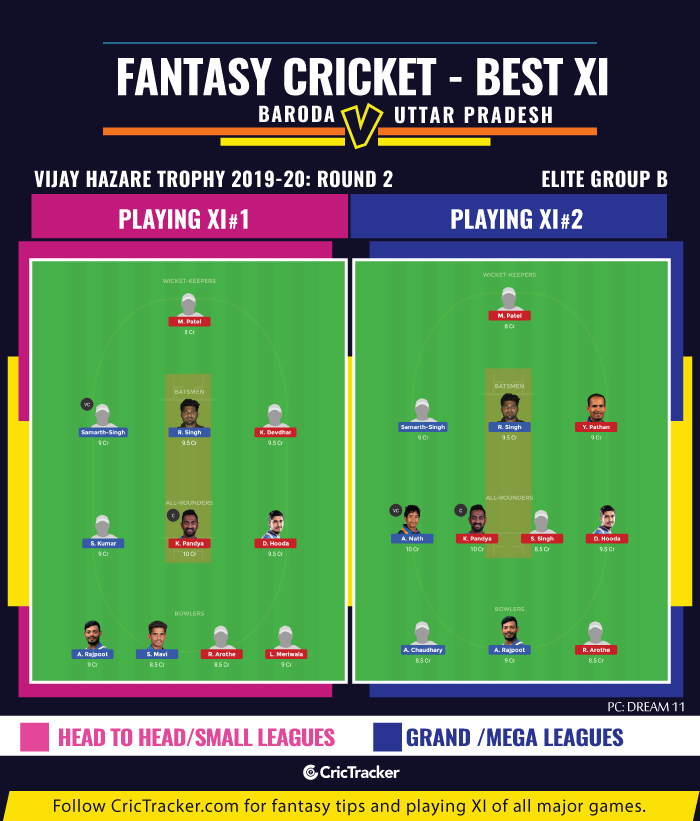 All-rounders are the key on this surface with this being a good track to bat on. KrunalPandya and Saurabh Kumar are allrounders whose left-arm spin can yield a wicket or two and also contribute some runs with the bat.

Similarly, the new ball bowlers will also get some swing upfront which Rishi Arothe and AnkitRajpoot set to enjoy the conditions in the powerplay overs.

Baroda should get the win over a young UP side, which lacks experience on the bigger stage.