Sachin Baby could be a decent option as captain or vice-captain since he will bowl a few overs.

The Round 3 match in the Elite Group A of the Vijay Hazare Trophy 2019-20 will be played between Kerala and Saurashtra at the Just Cricket Academy Ground in Bangalore.

Kerala and Saurashtra will face off in the Group A match on Wednesday at the Just Cricket Academy Ground. The continuous rain in Bangalore hasn’t allowed even the toss to take place in the first two days across the three venues. Saurashtra’s game against Mumbai on tournament’s opening day and Kerala’s match against Chhattisgarh were two of those six Group A matches.

Jaydev Unadkat is named Saurashtra skipper while Robin Uthappa is set for his maiden stint with Kerala and will be leading them. Interestingly, he was part of Saurashtra over the last couple of seasons after moving out of his home side Karnataka. Sanju Samson will be the player to look out for in this game given the hype around him over the last six months from former players and experts.

The matches in Bangalore are under the threat of rain for the 3rd consecutive day. Rain with thunderstorm is forecasted for Thursday but the chances of rain are bit lesser.

Just like the last season’s matches, we could see moderate scores at the Just Cricket Academy. The low scores last year were mostly due to the early start. With moisture around due to continuous rains, the same could be seen this year. The chasing teams are likely to have a good record here.

Dharmendrasinh Jadeja and Jalaj Saxena are part of the Board President’s XI squad which faces South Africa in the match starting on Thursday.

Sheldon Jackson’s List A record will make him a must pick. He has scored two hundreds across nine innings in the previous two editions of Vijay Hazare. Sanju Samson doesn’t have great domestic record but will be motivated by being in contention of selection. Jaydev Unadkat will be important having bagged 16 wickets in the previous edition.

Vishnu Vinod had got starts in most of the games but his conversion rate is an issue. Kushang Patel took 17 wickets in only six matches during the 2016/17 season which includes two 4-wicket hauls. However, he didn’t feature in the next two seasons and only played a season of Syed Mushtaq Ali since then.

Sachin Baby could be a decent option as captain or vice-captain since he will bowl a few overs. 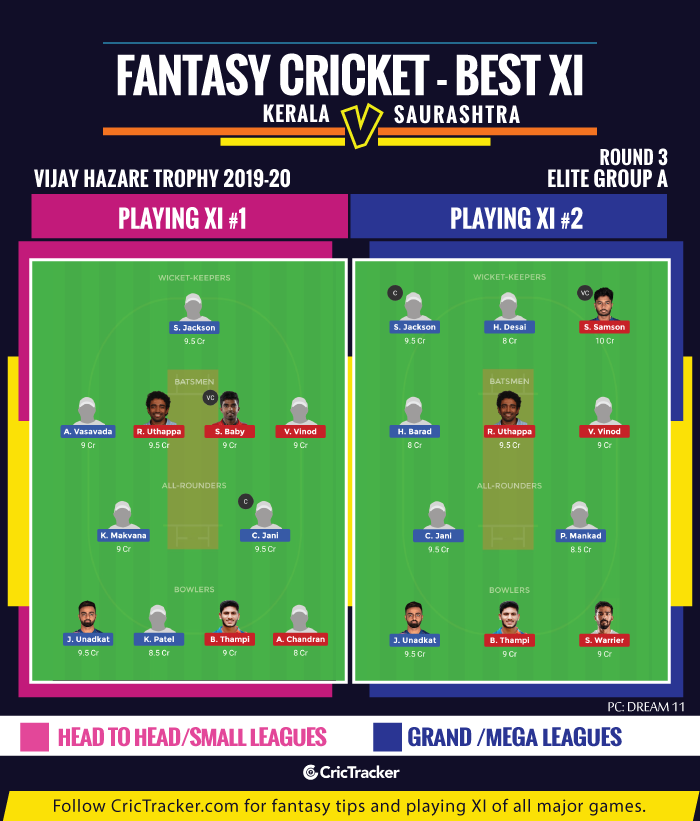 Kerala’s batting order is something that could make a difference. If P Rahul gets promoted as an opener, all the senior batsmen will come one position down.

Kerala’s pace attack could make the difference if the conditions are tough for batting due to rains.