UP will be led by Samarth Singh and the side will hope that the skipper carries on with his last year's form.

The Round 04 Elite Group B game will be played between Vidarbha and Uttar Pradesh at the Reliance Stadium in Vadodara.

As the caravan of the 2019-20 Vijay Hazare Trophy rolls on, both Vidarbha and Uttar Pradesh will be desperate to get on the park. Both sides have had their first two games washed out due to a combination of inclement weather and the subsequent wet-outfield and have had to settle with sharing equal points.

Both sides will hope they shrugged off the ignominy of the previous season where they ended up at sixth and seventh in their respective groups. While Vidarbha will be led by an experienced campaigner in Wasim Jaffer, UP will be led by Samarth Singh, who had a breakout domestic season last year.

The game is off-course possible only if weather permits. And, sadly it’s not looking good for tomorrow in Vadodara. According to the weather report, Thunderstorms are expected throughout the day. While the humidity is expected to be around 88%, the chances of rain are 80 percent.

The pitch at the Reliance Stadium has spent almost its entire time under the covers in the past few days. All the three games that were originally scheduled were abandoned either due to rain or wet outfield. So, even though the average score at the venue in the last five completed List A games is 265, the fast bowlers could have a role to play considering the damp conditions.

Uttar Pradesh: UP will be led by Samarth Singh and the side will hope that the skipper carries on with his last year’s form. In 3 matches last season, Samarth Singh scored 227 runs at an average of 113.50 which included a half-century and a hundred. The onus will be on him to spearhead the inexperienced batting unit along with Akshdeep Nath (258 runs in 7 games) and Upendra Yadav (233 runs in 6 games).

The onus of leading the bowling attack will be on Shivam Mavi and Ankit Rajpoot. 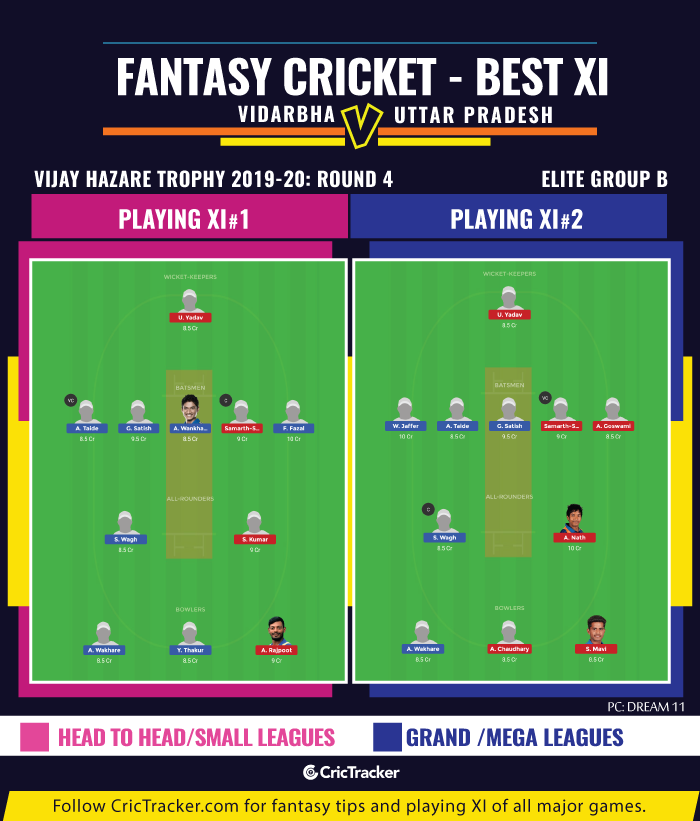 With rains expected to play spoilsport, it could be a rain-curtailed encounter. Hence, picking more top-order batters can reap you great rewards.

The Probable winners thus far in Vijay Hazare Trophy has been rain. But, in an unlikely event of a full game, considering the experience that Vidarbha have, they should start as favorites.