With this being a high scoring ground, top-order batsmen and finishers are crucial in the context of the fantasy contest with the likes of Shreyas Iyer, Shivam Dube and Ricky Bhui bound to score some runs on this surface.

Defending champions, Mumbai looks to continue to their ascent to the top of the Elite Group A points table as they face Andhra on Saturday. Andhra comes into this game on the back of a tough loss to Saurashtra while Mumbai has bounced back nicely from a defeat at the hands of Chattisgarh.

Although Andhra is well equipped with the likes of Ricky Bhui and Yarra Prithviraj in their ranks, Mumbai boasts of a number of India A regulars, capable of single-handedly winning games for their side.

In spite of Mumbai’s top order not being up to the mark so far, Suryakumar Yadav and Shreyas Iyer have ensured two consecutive wins for them. Their bowling unit is filled with talent and experience with Shivam Dube acting as the link between the batting and bowling department.

Although Andhra will be considered as the underdogs for this game, Srikar Bharat, whose name has already popped up during national selection, would be crucial to their fortunes. With the KSCA Ground hosting this game, another thrilling encounter between two of the most talented teams in the division is assured.

There isn’t any threat of rain at the start of the match although rain is expected in the latter half of the day. The temperatures will hover around 23 and 27 degrees Celsius with cloudy conditions also prevalent.

With a List A average of nearly 44, Shreyas Iyer announced himself at the international stage as well earlier in the year and is due for a big one. Shivam Dube’s emergence as a quality pace-bowling all-rounder for the India A side outlines his talent. Although he hasn’t fired yet in 2019-20, the pitch should aid his skill-set. With eight wickets in two games, KKR and Andhra pacer, Yarra Prithviraj is also one to watch out for in this game. 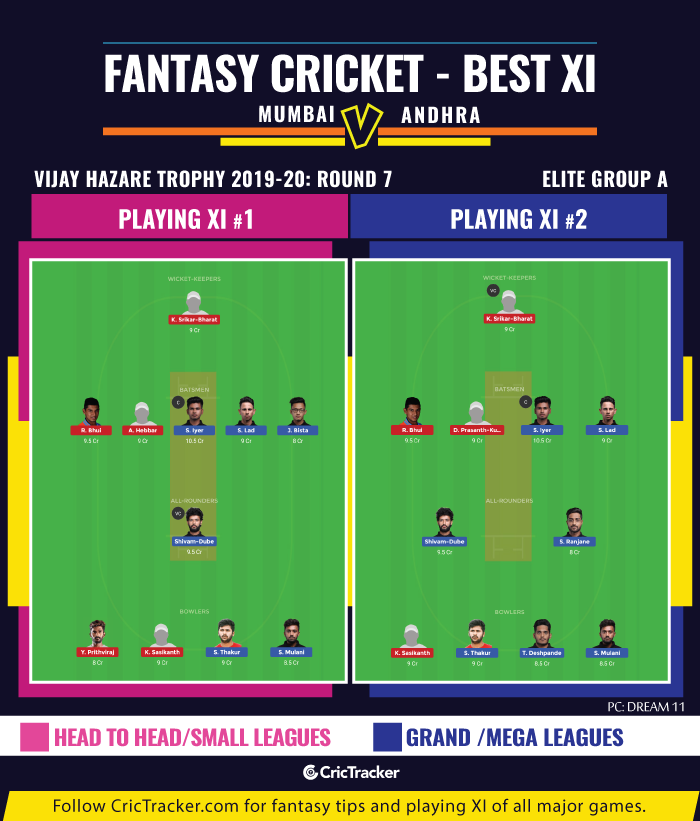 With this being a high scoring ground, top-order batsmen and finishers are crucial in the context of the fantasy contest with the likes of Shreyas Iyer, Shivam Dube and Ricky Bhui bound to score some runs on this surface.

Shams Mulani has picked six wickets in three games this season. With the spinner available at an affordable 8.5 credits, he could be a safe option ahead of Shubham Ranjane and Dhawal Kulkarni.

Mumbai should make light work of an Andhra side, without the services of captain, Hanuma Vihari.