With the pitch expected to be a safe haven for batters, picking more top-order batsmen will be worth a punt.

The Round 7 match in the Elite Group C of the 2019-20 Vijay Hazare Trophy will be played between Rajasthan and Bengal at the Sawai Mansingh Stadium in Jaipur.

The juggernaut of the 2019 Vijay Hazare Trophy rolls on and the Round 07, Elite Group C will see Rajasthan play hosts to Bengal at the Sawai Mansingh Stadium in Jaipur. Both sides are coming off a defeat in their last completed encounter. For Bengal, it has been an up-and-down campaign thus far.

A resounding win has been followed by an equally nerve-wracking shellacking. Their last game saw them go down to Tamil Nadu after they failed to chase 287 set by Dinesh Karthik-led unit. They will now face another side who has been grappling with poor run-of-form. Rajasthan has now lost three on the bounce and will hope they can address their slide tomorrow.

After a long period of time, we finally have good news for you as far as the weather report is concerned. It is expected to be a sunny day at Jaipur tomorrow with the temperatures hovering between 22-33 degrees while the humidity is set to be around 59%.

The pitch at the Sawai Mansingh Stadium has always been a belter of a track for batsmen. In the six matches played in this season thus far, the sides batting first have notched up a total in excess of 250 on five occasions. Much of the same can be expected tomorrow.

Rajasthan: Rajasthan’s batting has been in absolute shambles this season. In their last game against Gujarat, they were bowled out for a meagre 102 with Manender Singh top-scoring with 35. He, along with the likes of Mahipal Lamror and Chetan Bist will have to take the mantle upon themselves to spearhead the batting unit. The onus of spearheading the bowling unit will be on Deepak Chahar, Khaleel Ahmed, and Rahul Chahar.

Bengal: The key to Bengal’s success in this season thus far has been their top-order. And, one of the major reason for their defeat against Tamil Nadu, was the inability of their top-order to provide them with an ideal platform. Opener Shreevats Goswami has scored 205 runs in 4 games at an average of 68.33 while the likes of Abhimanyu Easwaran [52 runs in 2 games] and Shahbaz Nadeem [140 runs in 4 games] have also chipped in at various stages.

In the absence of Wriddhiman Saha, the onus will be on these three Bengal’s batting. The bowling unit- as usual- will be led by the trio of Ashok Dinda [7 wickets], Ishan Porel [6 wickets] and Arnab Nandi. 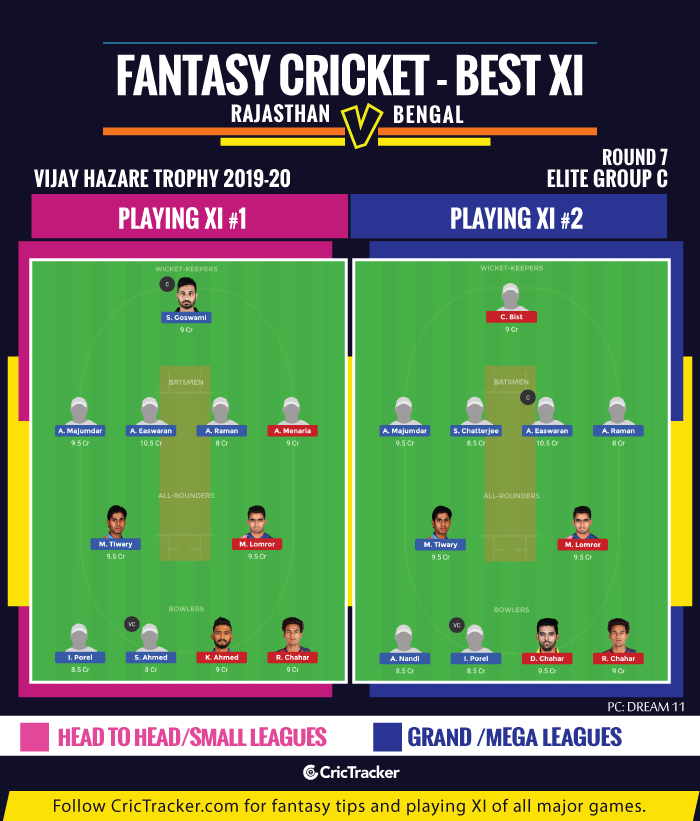 With the pitch expected to be a safe haven for batters, picking more top-order batsmen will be worth a punt.

Considering the current form and Rajasthan’s batting struggles,  Bengal will start as favorites.

*Disclaimer: This team is based on the understanding, analysis and instinct of the author. While selecting your team, consider the points mentioned and make your own decision