It would be wise to wait for the playing XIs to come after the toss as Karnataka might bring back either Mithun or Pavan Deshpande.

The Round 8 Elite Group A and B game of the 2019-20 Vijay Hazare Trophy will be played between Andhra and Karnataka at the Just Cricket Academy Ground in Bengaluru.

After rain playing spoilsport in the first week of the ongoing Vijay Hazare Trophy 2019-20 season, the things are slowly coming back on track. The rain has considerably slowed down even as the table-toppers Karnataka will lock horns against Andhra in Bengaluru. The Manish Pandey-led side are looking in good form this season having won three out of the four matches they’ve played.

Their only loss came at the hands of Hyderabad while chasing a low total but that seems to be the only blip. Andhra, on the other hand, haven’t had the best of times. After winning the truncated match against Goa, they went down rather meekly against Chhattisgarh and Saurashtra. Going past Karnataka won’t be an easy task either for them and they will have to play out of their skins.

The forecast for this match is mostly clear. Though there will be clouds hovering around the stadium, the rain is only likely to come down at 3 PM and that too might be a passing shower. The temperature will hover around 28-29 Degrees Celsius according to AccuWeather.

The scores haven’t been too high at the Just Cricket Academy this season in the four matches. Also, the teams batting first have more often than not been at the advantage. Unless the conditions are too overcast, the team winning the toss is expected to bat first and the total around 250-265 should be par.

Average first innings score: 225 (Four matches this season so far at the venue)

(Will be updated once we get any update)

Manish Pandey is the third-highest run-getter of the tournament so far with 292 runs to his name at an average of 97.33 in four matches. KL Rahul is also one of the batsmen in form for Karnataka.

Prasidh Krishna, Gopal and Gowtham have shared wickets for Karnataka so far and they could be lethal once again against Andhra. 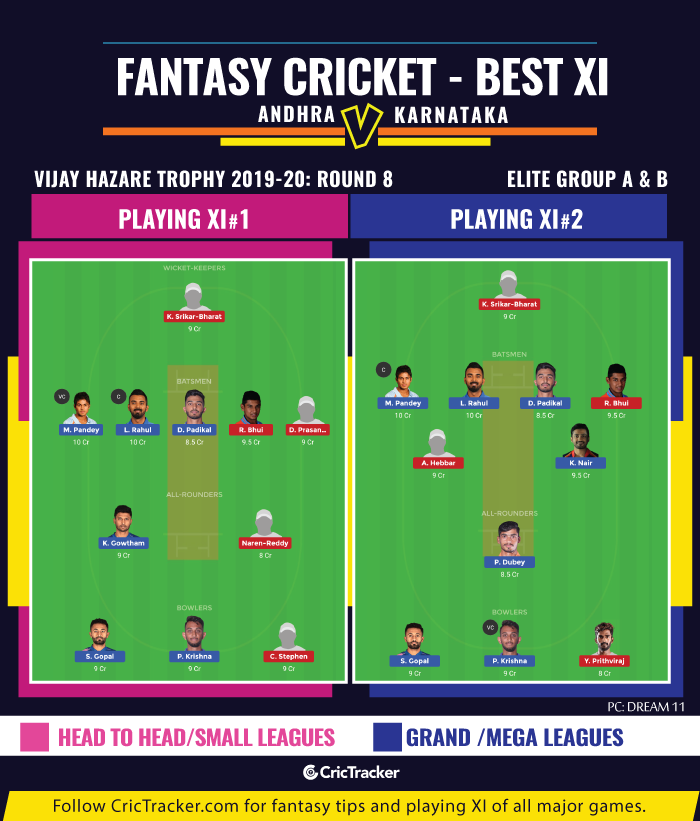 It would be wise to wait for the playing XIs to come after the toss as Karnataka might bring back either Mithun or Pavan Deshpande.

If Karnataka is batting first, then Manish Pandey could be made the captain else KL Rahul would be a good option. Andhra’s batting hasn’t been great so far and if they bat first, it might be a low-scoring affair. Gopal and Krishna could be made C or VC in that case.

Karnataka are the clear favourites to win this game.