Railways batting was in prime form in the last game against Jammu and Kashmir. Hence picking more batsmen from Railways will be worth a punt.

The Round 9 Elite Group C game of the 2019-20 Vijay Hazare Trophy will be played between Railways and Rajasthan at the Jaipuria Vidyalaya Ground in Jaipur.

So, as the razmataz of the 2019-20 Vijay Hazare Trophy rolls on, Rajasthan will square-off against Railways in the Round 09 Elite Group C encounter on Sunday.

Rajasthan has had a forgettable tournament thus far. The Mahipal Lamror-led unit has lost five games on a bounce and is in desperate need of a victory if they are to resurrect their fledgling campaign. They come into this after another 47-run pounding, this time against Tripura where their batting-unit sans Mahipal Lomror [71] failed to put any sort of resistance and were bowled out for 238.

They’ll now face an equally beleaguered Railways, who after having started their campaign with an impressive 84-run win over Bihar, have now proceeded to lose three games on the bounce. Their latest defeat came at the hands of Jammu and Kashmir where despite an imperious batting effort- led by half-centuries from Arindam Ghosh [64] and Dinesh Mor [70]- the inability of their bowlers sans Himanshu Sangwan [3-66] to defend 6-285 paved way for a four-wicket defeat.

The pitch at the Jaipuria Vidyalaya Ground has been good for batting this far in the tournament. In the nine-game held at the venue in this season, the teams have racked up a score in excess of 250 on five occasions.

Will be updated once we get any update

Rajasthan: Rajasthan’s nemesis has been the inconsistency of their batting unit. Skipper Mahipal Lomror [71] and wicket-keeper Chetan Bist [29] will have to take it upon themselves to spearhead the unit.

Railways: Railways batting was really consistent in their last game against JK. While Arindam Ghosh [64] and Dinesh Mor [70] scored half-centuries, others too chipped in with valuable contributions.

But, it was their bowling that led to their undoing. Barring Himanshu Sangwan [3-66], none of the bowlers could put any sort of fight. Along with Sangwan, the onus will be Pradeep T and Karn Sharma to take more responsibility with the ball. 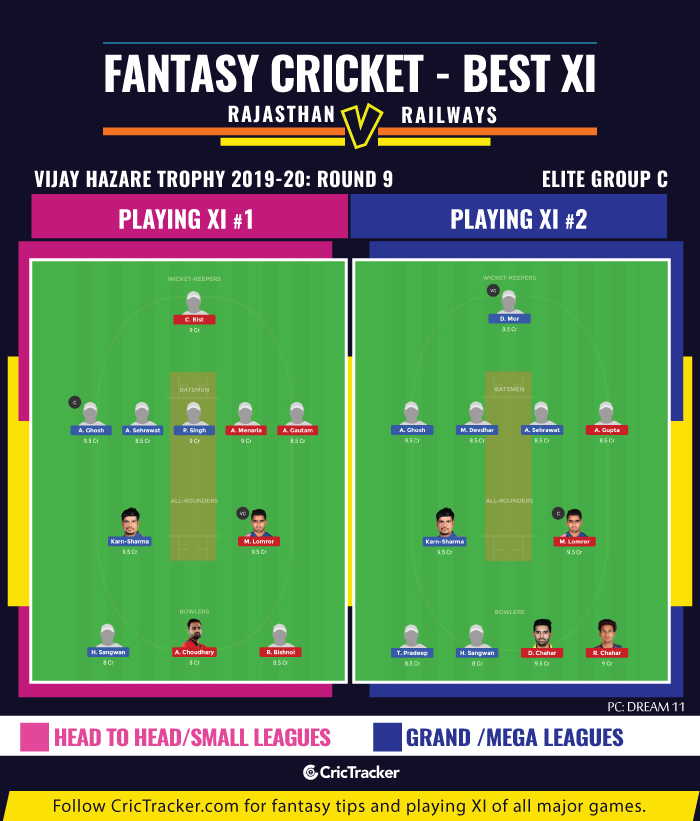 Railways batting was in prime form in the last game against Jammu and Kashmir. Hence picking more batsmen from Railways will be worth a punt.

Both sides have had a dismal run thus far. Having said that, considering Rajasthan will be playing at home, they’ll start as slight favorites.