It is advisable to pick Rishi Dhawan as a captain as he will get you points with the bat as well as with the ball.

The Elite Group D match of the Vijay Hazare Trophy 2020-21 will be played between Rajasthan and Himachal Pradesh on 23rd February at Sawai Mansingh stadium in Jaipur.

The match is scheduled to start at 9:00 AM local time and IST. It can be watched live on Start Sports Network and can be streamed on

Rajasthan will go head-to-head against Himachal Pradesh in Round two Elite D Group match of the Vijay Hazare Trophy 2021 on Tuesday. Rajasthan are placed third on the Group D points table after starting their campaign with a win. Himachal Pradesh are placed fifth after losing their opening match against Maharashtra.

Rajasthan dominated Puducherry in their first encounter of the tournament.  On the other hand, Himachal Pradesh suffered a thrashing against Maharashtra while chasing a target of 295 runs. Rajasthan will go into this match as favourites, with both their batting as well as bowling department performing well.

RJS vs HIM Weather Report:

It will be a sunny morning here in Jaipur, with the temperature hovering around the 25 to 27 degrees mark. The chance of precipitation for this match is low.

The pitch is expected to favour the batsmen more than bowlers. A high scoring encounter in anticipated in this match.

RJS vs HIM Top Picks for Today’s Dream11 Match

Rajasthan wicket-keeper batsman Manender Narender Singh has an average of 47.86 in list A matches with the highest score of 118. He can be a game-changer in your Dream11 fantasy XI.

Southpaw Ashok Menaria is a veteran when it comes to list A cricket. He has a batting average of 30.50 in 88 matches, with 33 wickets bowling slow left-arm orthodox.

Khaleel Ahmed has 67 wickets in 44 list A matches with an economy of just over 5. He can be a great pick as a bowler in your fantasy XI.

Amit Kumar is one of the experienced campaigners in the Himachal Pradesh side. He averages 32.44 in list A cricket along with six wickets to his name.

Rishi Dhawan is a must-have all-rounder in your side because of his abilities with both ball and bat. He has played 97 matches in his list A career, picking up 127 wickets and averaging 34 while batting.

Suggested Playing XI No.1 for RJS VS HIMDream11 Fantasy Cricket: 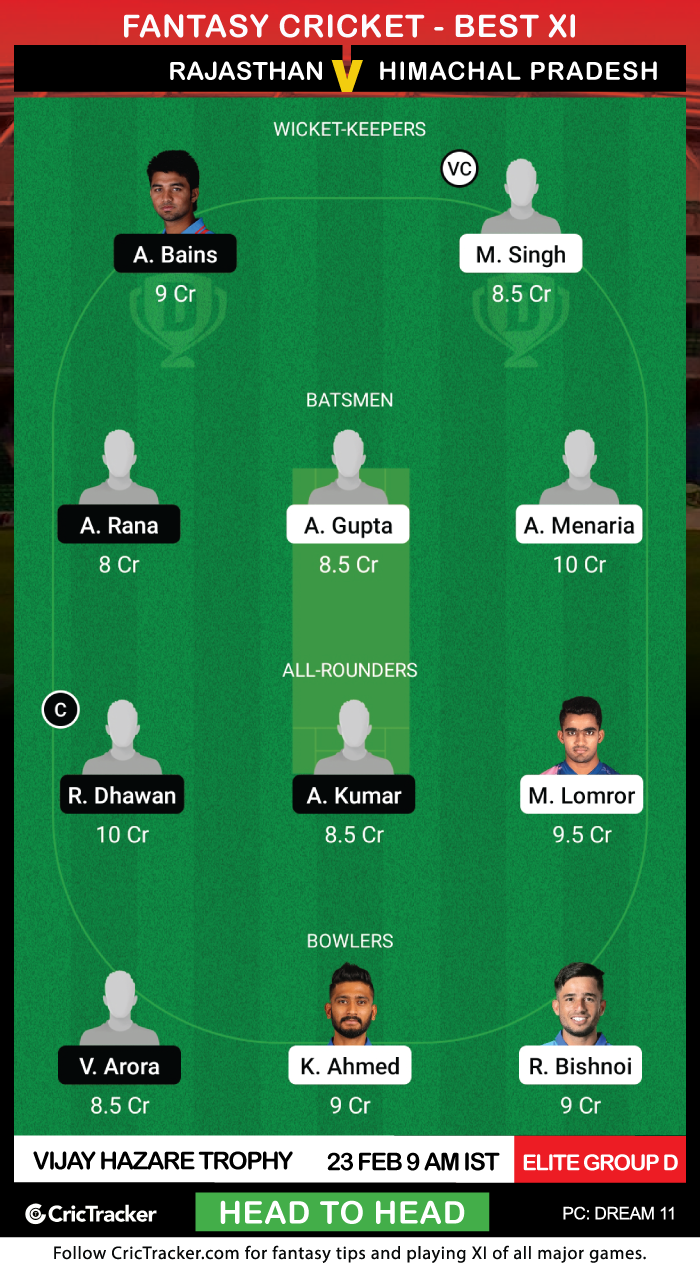 Suggested Playing XI No.2 for RJS vs HIM Dream11 Fantasy Cricket: It is advisable to pick Rishi Dhawan as a captain as he will get you points with the bat as well as with the ball.

Rajasthan are expected to win this match.