Virat Kohli is the most passionate cricketer I’ve come across: Tymal Mills [Interview]

Virat Kohli is the most passionate cricketer I’ve come across: Tymal Mills [Interview]

Mills also revealed a thing he would want to teach Virat Kohli. 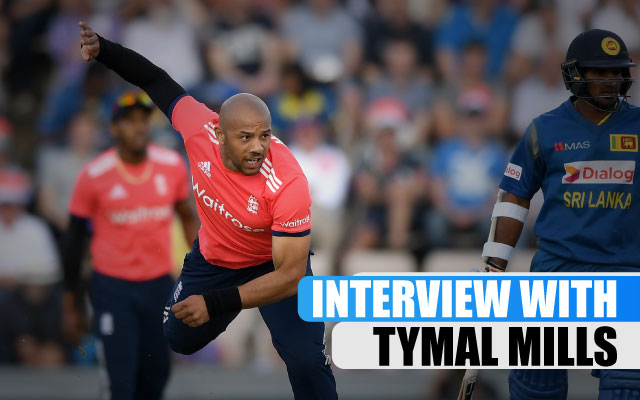 Tymal Mills is a mere 28 years old, but it’s already been six years since he last played first-class and List A cricket. The left-arm fast bowler played a combined tally of 55 games in the two formats before devoting his heart and soul to T20 cricket. At the young age of 22, he suffered from a narrow spinal cord and bowling long spells would have aggravated the injury even more in the future.

He realised that bowling 14-15 overs in a day won’t help him recover. Hence, he switched to playing the 20-overs format from thereon. In 2016, he donned the national jersey for the first time in a T20I against Sri Lanka at the Rose Bowl in Southampton. The southpaw couldn’t get a wicket after which he played three more T20Is for the Three Lions on their tour of India back in 2017.

Since then, he hasn’t represented the national team but is still hopeful of finding his place back. In 130 T20 matches, Mills has picked up 142 wickets at an impressive economy rate of 7.83. In 2017, he also played for the Royal Challengers Bangalore in the cash-rich Indian Premier League.

RCB picked him for INR 12 crores and he got five wickets from as many games. Meanwhile, Mills took time out of his busy schedule and featured on CricTracker’s Question-and-Answer Session ‘Free Hit’. In the chat, he spoke about Indian cricket and had some funny answers up his sleeves as well.

Here are the excerpts from Tymal Mills’ interview:

My debut for England against Sri Lanka and my IPL debut in 2017 in front of a full-house in Hyderabad.

What’s the strangest thing you have ever eaten?

I’ve eaten some strange animals when I’ve been on tours. I ate an alligator during my visit to Australia.

Who’s the most passionate cricketer you have ever come across?

What’s the best thing about fatherhood?

Every morning when I go to my daughter’s room, she gives a big smile and unconditional love.

What’s the best form of cricket according to you?

T20 cricket, according to me. This is all I play now. T20s have given me the opportunity to travel all around the world, meet some great people and experience new cultures.

Who’s the best cricket captain ever according to you?

Eoin Morgan is an excellent captain.

What does your cheat meal consist of?

Which T20 league is the most entertaining- IPL, BBL or PSL?

The IPL wins most categories in terms of franchise cricket. It’s the biggest competition in the world. I’ve been lucky enough to play in almost every competition and they all have some strong quality they bring to the table, on and off the field.

I want to take my family to a country like Sri Lanka.

If you could be an animal, what would you be?

What’s the one thing that annoys you the most?

People think they can sing, but they aren’t good singers.

If you were a hashtag, what would you be?

I have enjoyed watching other left-arm fast bowlers. So, it’s Mitchell Johnson and Mitchell Starc.

Where is the best cricket stadium in the world?

Pukekura in New Zealand. I am glad, having played there.

What’s your best moment from the RCB dressing room?

Mandeep Singh taught me some dance moves from the part of India he is from.

Who’s the batter from the past you want to bowl to?

Who’s the wittiest cricketer in the RCB team when you played?

Yuzvendra Chahal. He was always fun to be around.

What’s the one thing you would teach Virat Kohli?

I don’t think I can teach him much in terms of cricket. Maybe, how to deal with English weather.

Who’s your best friend in the cricket world?

Tom Craddock. He was a leg-spinner and we played together at Essex. He took a five-wicket haul against England when we played a first-class game against them.