Virat Kohli is currently on the West Indies tour and has already sizzled with the bat scoring two back-to-back centuries in the ODI series. With the Test series set to commence on August 22, the Indian captain is on a small break after missing out on the practice game due to a finger injury sustained during the third ODI. He has been rested to recover from the thumb injury which Kohli deemed not serious after the final match of the series last week.

Interestingly, Kohli is holidaying with his wife Anushka Sharma in Miami as the couple has shared a few pictures on their official Instagram handles. Anushka has more often than not seen with her cricketer husband on tours and both make time for each other from their hectic schedule giving others couple goals every now and then.

Meanwhile, while enjoying on the beach, Anushka Sharma shared her bikini-clad picture and looked stunning in it. Moreover, her beauty was personified by the drop ear-rings which she wore and the fans are already floored after watching the picture. It is no surprise that her husband Virat Kohli also loved the photo and reacted ‘love’ emoji on Instagram which shows the amount of love they share for each other.

Now Virat Kohli is expected to return with only three days to go for the opening Test in Antigua. This series also marks the beginning of India’s journey in the ICC World Test Championship. Australia and Sri Lanka have already registered victories under the new two-year cycle and are currently at the top two of the points table respectively.

India are the world’s number one team in the longest format and no wonder they are the favourites to play the first-ever final at Lord’s after the culmination of the two-year cycle. 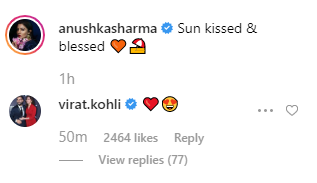