2018 in Kohli’s career is roughly an equivalent to the year 1998 in Tendulkar’s illustrious career.

Indian captain Virat Kohli is having a fabulous 2018. This is his 11th year in international cricket since making debut against Sri Lanka in 2008 and he has completed 10,000 ODI runs this year besides excelling in the other two formats as well. While entering the 10,000 runs club, Kohli smashed the record of legendary Indian batsman Sachin Tendulkar as the quickest to complete the journey. He took 53 matches and 54 innings less than the Master Blaster.

Historically, the year 2018 is also significant for another reason. This year in Kohli’s career is roughly an equivalent to the year 1998 in Tendulkar’s illustrious career. Exactly two decades ago, Tendulkar had a mega-successful year in ODIs which had catapulted him to the top of the race in the 50-overs format and made him a sort of an uncrowned king. 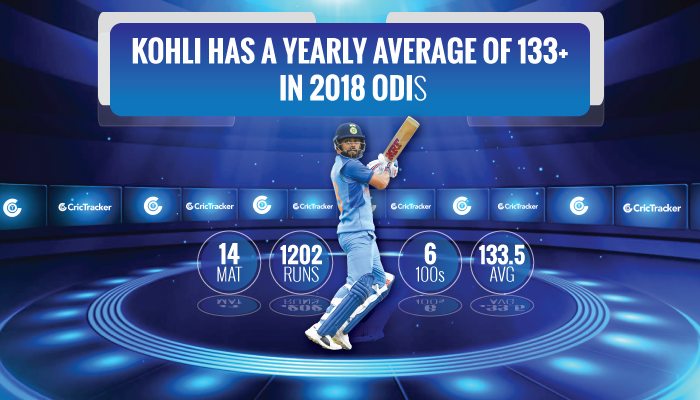 Down to the numbers now. In 2018, Kohli has played 14 ODIs, nine of which were abroad, and he slammed six centuries in these matches which means a century in every little-more-than-two matches. He has played six matches against South Africa, three against England and five against the Windies. In these 14 games, Kohli’s total run tally is 1,202 at an average of 133.55!

Besides six tons, Kohli has scored three half-centuries in these matches and remained not out on five occasions. He skipped the Asia Cup held in September or else the numbers could have been even higher. Of his six hundred, three have come against South Africa in a six-match away series while three on the trot against the Windies in a five-match home series.

In South Africa, Kohli scored hundreds in the first, third and sixth matches while against the Caribbeans, his three-figure-marks came in the first, second and third matches.