Virat Kohli vs Sachin Tendulkar: How many of their centuries have helped India win abroad

Virat Kohli vs Sachin Tendulkar: How many of their centuries have helped India win abroad

We're also reopening the record books of Sachin Tendulkar to compare the two ace batsmen’s individual records and how frequently they have come to their team’s rescue.

Indian captain Virat Kohli returned a tragic figure in the second Test against Australia at the Perth Stadium, ending up in the losing side despite scoring a scintillating 123. A collective batting failure from the visitors saw them losing the game by 146 runs and allowing the hosts to square the four-match series 1-1.

This was the third time in 2018 that Kohli scored a ton in an away Test but could not see his team through, the other two being Centurion in South Africa in January and Birmingham in England in August. Before the series progresses to Melbourne, let’s take a look at the statistical details to understand how Kohli’s own record matches with that of his team.

We’re also reopening the record books of Sachin Tendulkar to compare the two ace batsmen’s individual records and how frequently they have come to their team’s rescue. 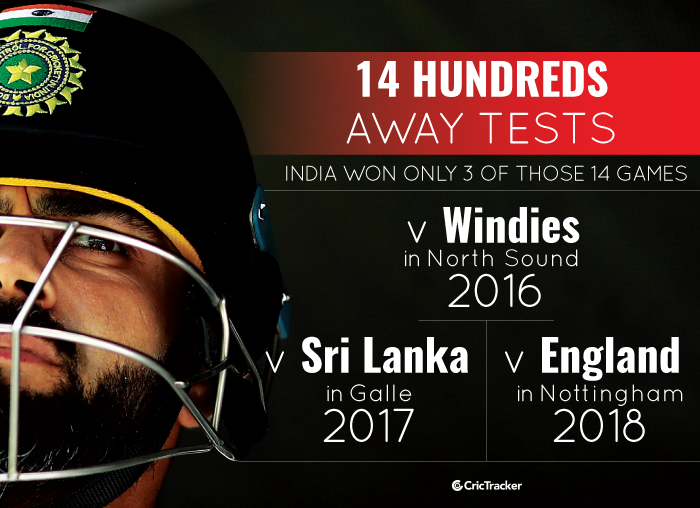 Kohli’s 123 in Perth was his 25th century in Tests and he reached there as the second quickest after the great Don Bradman, bettering Tendulkar, who was the second best till now, by three innings.

Out of the 25, Kohli has scored 14 on foreign soil (in fact eight of his first 11 Test hundreds came abroad) and out of those 14 times, India won on three occasions (against Windies in North Sound in 2016; against Sri Lanka in Galle in 2017 and against England in Nottingham in 2018) which means the success percentage of Kohli’s tons on foreign soil is 21.42 per cent. 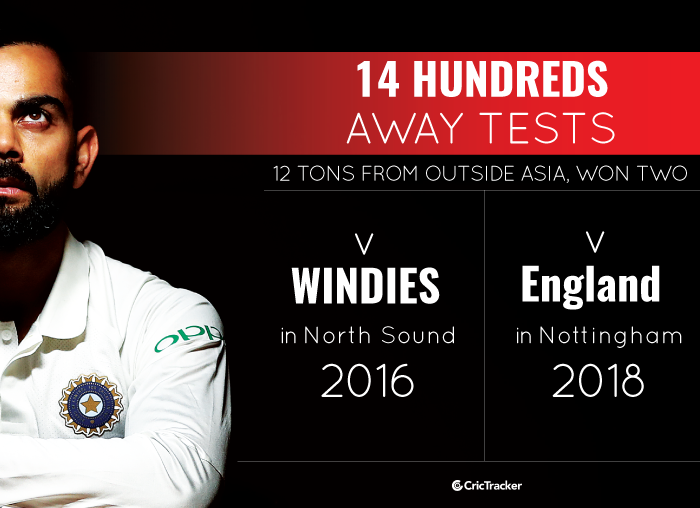 One striking aspect of Kohli’s away Test hundreds is that 12 of those 14 have come outside Asia which is quite an impressive number. Out of those 12 hundreds in 11 matches that he scored outside Asia in the longer format, only two could help India win a game (in North Sound and Nottingham). While on five occasions, India lost the match (in one game against Australia in Adelaide in 2014, Kohli scored hundred in both innings but yet failed to see India win).

On four occasions did he scored a hundred in a drawn Test (Johannesburg in 2013; Wellington and Melbourne in 2014 and Sydney in 2015). The two Test hundreds that he has scored in Asia are against Sri Lanka in Galle in 2015 and 2017 and India have a 1-1 track record in those matches.

A comparison with Sachin Tendulkar in Tests 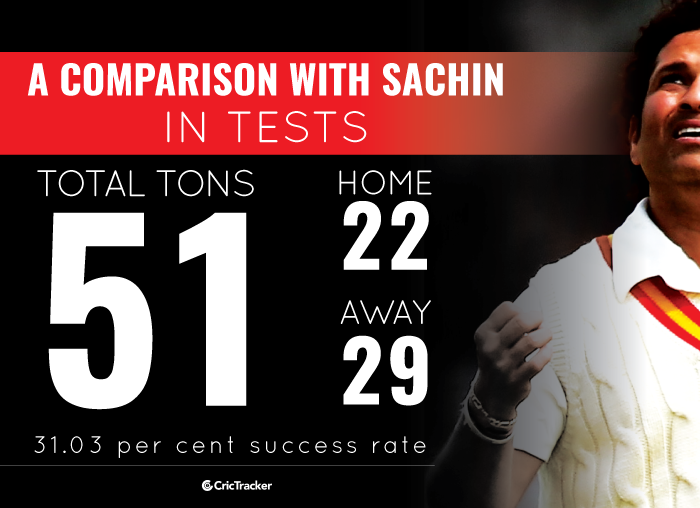 We can take the liberty to make a comparison between Kohli with the great Tendulkar in this regard since the two batsmen’s batting career has progressed on similar lines. The former batsman scored 29 of his 51 Test centuries on foreign soils (10 out of his first 13 Test hundreds came abroad) and India could see a win on nine occasions (31.03 per cent success rate) while they lost eight games and drew 12. 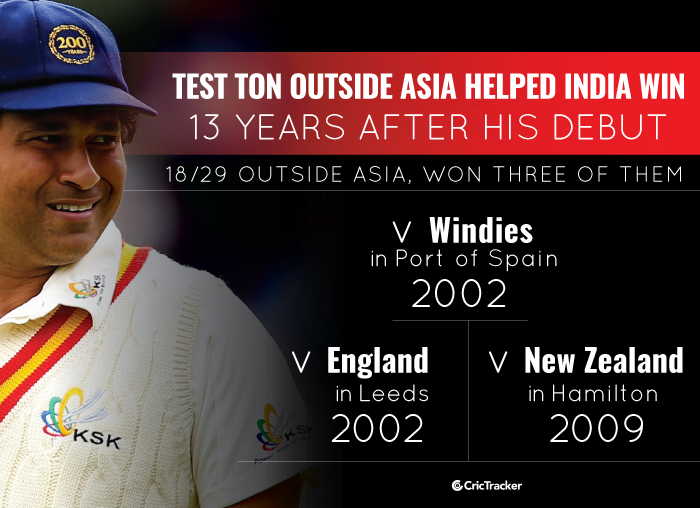 Out of those 29 centuries, Tendulkar scored 18 outside Asia though India could manage a win just three times out of them (against the Windies in Port of Spain and against England in Leeds in 2002 and against New Zealand in Hamilton in 2009) while they lost eight and drew seven times.

It is quite a unique record to see Tendulkar scoring a hundred outside Asia to help India win 13 years after making his debut in 1989. Kohli, on the other hand, took just five years to achieve the same feat. The remaining 12 away Test hundreds that Tendulkar scored in Asia came in Bangladesh and Sri Lanka (five each) and Pakistan (one). 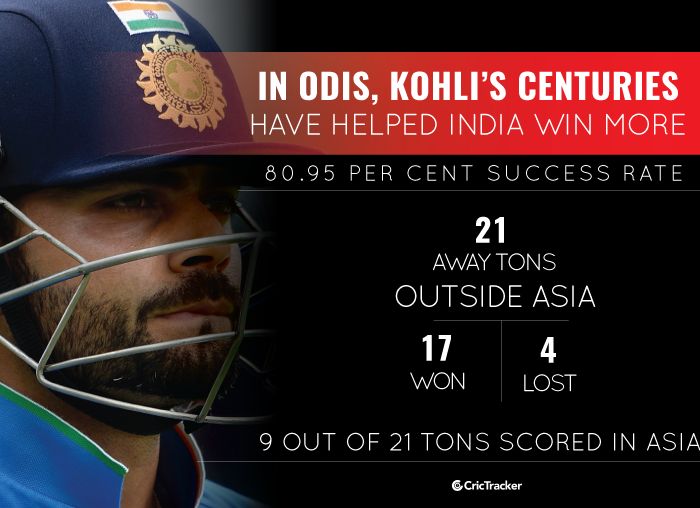 Kohli, who became the fastest batsman to score 10,000 runs in the ODIs, eclipsing Tendulkar yet again, has 38 tons in the format overall. Of these 38, he has scored 21 on foreign soil (55.26 per cent success rate) and India ended up as the best side in 17 of those games (success rate of 80.95 per cent) while they lost only four (one against England in England in 2011; one against New Zealand in New Zealand in 2014 and two against Australia in Australia in 2016).

Of the 21, Kohli has scored 12 away centuries in the 50-overs format outside Asia (success rate 57.14 per cent) and India ended up winning eight of those matches and lost four. The eight wins have come in South Africa (three in one series), Australia and Windies (two each) and Zimbabwe (once). The remaining nine away ODI centuries Kohli scored in Asia, five came in Bangladesh and four in Sri Lanka.

Comparing winnability of Kohli’s hundreds with those of Tendulkar 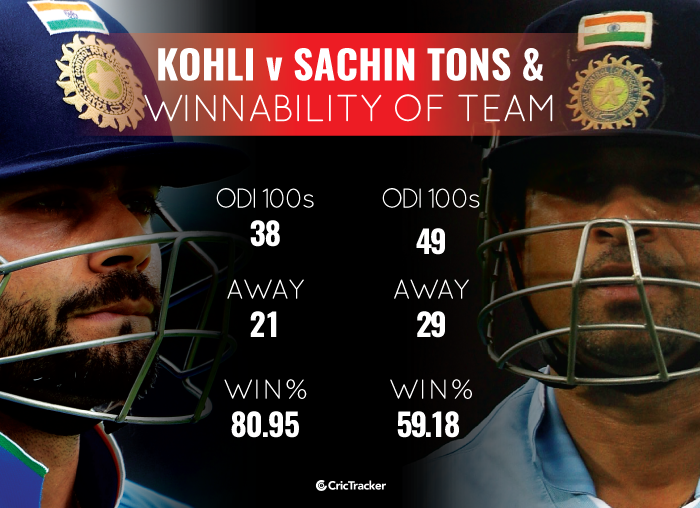 Tendulkar tops the list of century-makers in the ODIs as well, with 49. Like in Tests, he has also scored 29 of his centuries in the 50-overs format on foreign soil (59.18 per cent success rate) and India could win 18 of them (success rate of 62.06 per cent) and lost 10 while one match ended inconclusively.

Of these 18 again, Tendulkar scored 11 outside Asia (success rate 61.11 per cent) which means Kohli has already bettered his record by hitting ODI hundreds outside the Asian continent. India could win only nine of the ODI games outside Asia in which Tendulkar hit a hundred.

In Asia, Tendulkar’s most number of away centuries in ODIs came in Sharjah (seven), followed by  Sri Lanka (five), Bangladesh and Pakistan (two each) and Singapore and Malaysia (one each).