Virat Kohli the Indian Vice-captain and Skipper of the Royal Challengers Bangalore(RCB) team in the Indian Premier League(IPL) flew from Bangalore to Jodhpur there Virat met Anushka Sharma his rumored girlfriend ahead of IPL seeking lady luck.

The reports suggest that, Kohli went to Jodhpur to meet Anushka, who is there shooting for the movie NH10 at a small village Khejrala in Rajasthan. What was different this time was that the two did not try to hide from the shuttle buggers; they have previously on all occasions tried to hide out from the flashing cameras but not this time though.(get IPL fixture here) 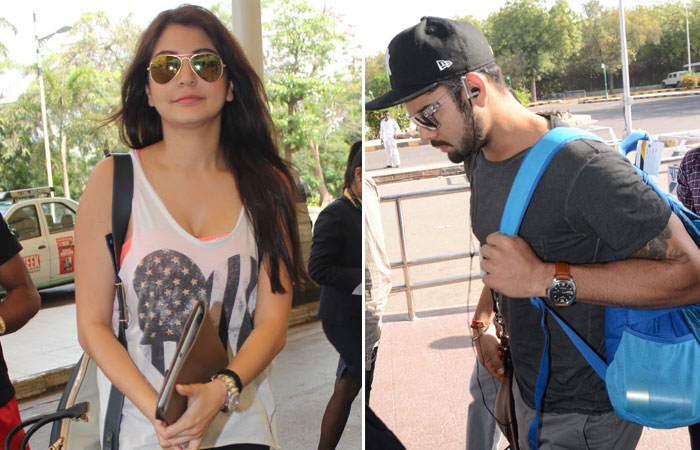 Anushka a famous and busy bollywood actress is in Jodhpur shooting for an upcoming movie. The dating duo are and will have tight schedule in the coming days but, manage to take spend some quality time with each other. Earlier in the year while Virat was with the Indian team in New Zealand Anushka made sure she flew all the way to meet her lover boy.(also read RCB team preview)

Earlier before Virat Kohli took time out after the Asia Cup and ahead of the World T20 in Bangladesh to fly down to Sri Lanka giving visit to Anushka who was shooting for the movie Bombay Velvet on the sets of film. The World T20 fared fantastic for Kohli as a player as he was the Man of the Tournament though India lost the finals.

Virat will be hoping for her luck to shine this time for him as skipper and his team RCB do well in the IPL since he has Lady Luck with him. As Royal Challengers Bangalore is scheduled to play the Delhi Daredevils on April 17 in Abu Dhabi a day after the tournament begins on April 16. Don’t be surprised if you see Anushka in the stands rooting for Kohli and RCB in UAE or Indian leg of IPL.