With the pitch expected to be flat, picking top-order batsman could be a crucial punt.

The 1st semi-final of the 2019 Vitality T20 Blast will be played between Nottinghamshire and Worcestershire at the Edgbaston Cricket Ground on Saturday.

This series can be live-streamed on the teams’ official website.

So, here we are! After two months of action-packed T20 matches, exhilarating finishes, outrageous batting or bowling performances, and a few excruciating lows, we are down to semi-final stage of the 2019 Vitality Blast.

The defending champions- Worcestershire- on the other hand, will be looking to qualify for the finals for the second time running. Both sides have met twice in the league stage. While the second game was a washout, the Outlaws suffered a 28-run loss in the first, courtesy an all-round display from skipper Moeen Ali (32 off 25 balls, 4-18).

We are at the end of the English summer. The rain is nowhere to be seen with bright sunny spells casting their shadows over the English isles. Much of the same is expected in Birmingham on Saturday with maximum temperature hovering around 21 degrees and a minimum at around 11 degrees.

As always, the pitch at the Edgbaston Cricket Ground is expected to be a belter. With the weather expected to be bright and sunny, expect pristine batting conditions on the Finals day. The last T20 played at the venue saw both Yorkshire [3-200] and Warwickshire [5-181] rack up totals in excess of 180. The pitch ideally gets slower as the game progresses as reflected from the stats below, showing that batting first is a prudent punt at this venue. Except the same on Saturday.

Nottinghamshire Outlaws: Alex Hales (366 runs in 11 games), despite being dropped from the national squad remains the heartbeat of the Outlaws set-up. He, along with Chris Nash (74 runs in the quarter-final) and skipper Dan Christian (168 runs in 11 games) will be the key with the bat.

Worcestershire: Skipper Moeen Ali scored a breathtaking 121 not out against Sussex, leading his side in 2nd consecutive semi-final. The all-rounder has been in top-notch form thus far, having racked up 312 runs in 5 games besides claiming 8 wickets in the process.

Aside from Ali, Riki Wessels (396 runs in 12 games) and Ed Barnard (126 runs & 11 wickets) will be the spearheads for the defending champions. 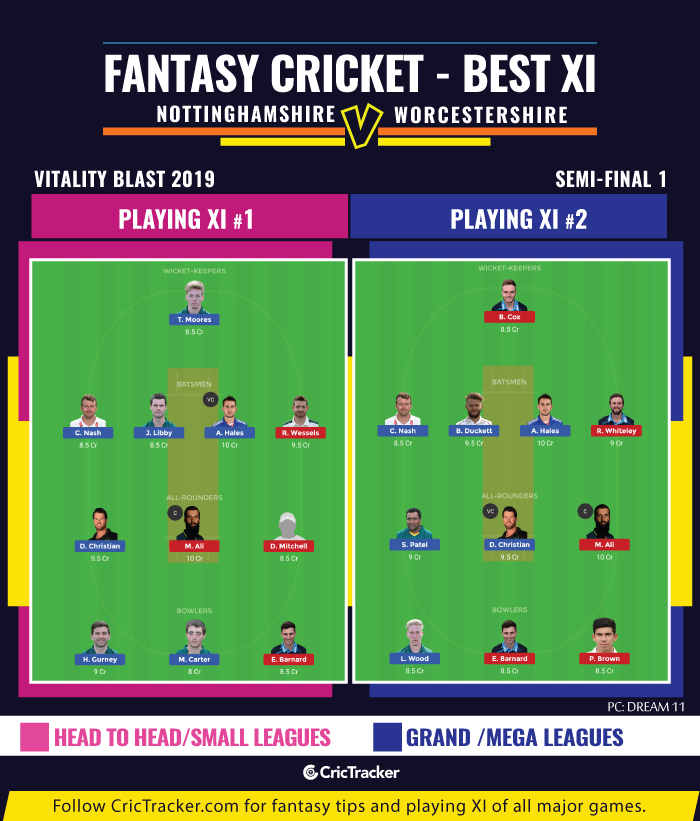 With the pitch expected to be flat, picking top-order batsman could be a crucial punt. Moeen Ali has been in top-notch form thus far. Grand League or small league, make sure you pick him as the captain of your Dream11 side.

Both teams stand at 2-2 after their last five completed encounters, with one match ending in abandonment. However, considering the experience that Worcester have of playing high-pressure games, they’ll start as favourites in this all-important semi-final.