It should be a humdinger of an encounter between two closely matches sides.

The 2nd semi-final of the 2019 Vitality Blast will see Derbyshire Falcons and Essex Eagles at the Edgbaston Cricket Ground on Saturday.

This series can be live-streamed on the teams’ official website.

The second semi-final will see Essex Eagles and Derbyshire Falcons lock horns to earn an opportunity to contest for the title. The Eagles arrival at the Finals day was unexpected- they won four out of their last five games and still needed few other results to go their way. In the quarter-finals, the experienced duo of Ryan Ten Doeschate and Ravi Bopara brought their A-game to the fore; registering an unbroken 60-run stand in the last five overs to stun Lancashire Lightning.

Their opponents- Derbyshire Falcons- maiden entry to the Finals day has also been another fascinating story of the season. Having finished third in North group, the Falcons saw off Gloucestershire in the quarterfinals with astounding ease with Wayne Madsen leading the way with a 37-ball-47 in the chase of 136.

The English summer is nearing its end. The rain is nowhere to be seen and bright sunny spells can be seen casting their shadows over the English isles. Much of the same is expected in Birmingham on Saturday with maximum temperature hovering around 21 degrees.

As always, the pitch at the Edgbaston Cricket Ground is expected to be a good one for batting. With the weather expected to be bright and sunny, expect pristine batting conditions on the Finals day. The pitch ideally gets slower as the game progresses and with this being the second game at the venue, chasing could become the tricky proponent. Except the same on Saturday.

With the bowl, Ravi Rampaul, 22 wickets- the leading wicket-taker in the tournament- and M Critchley (17 wickets at 16.41) alongside Hudson-Prentice (11 wickets at 26.81) will be the key. 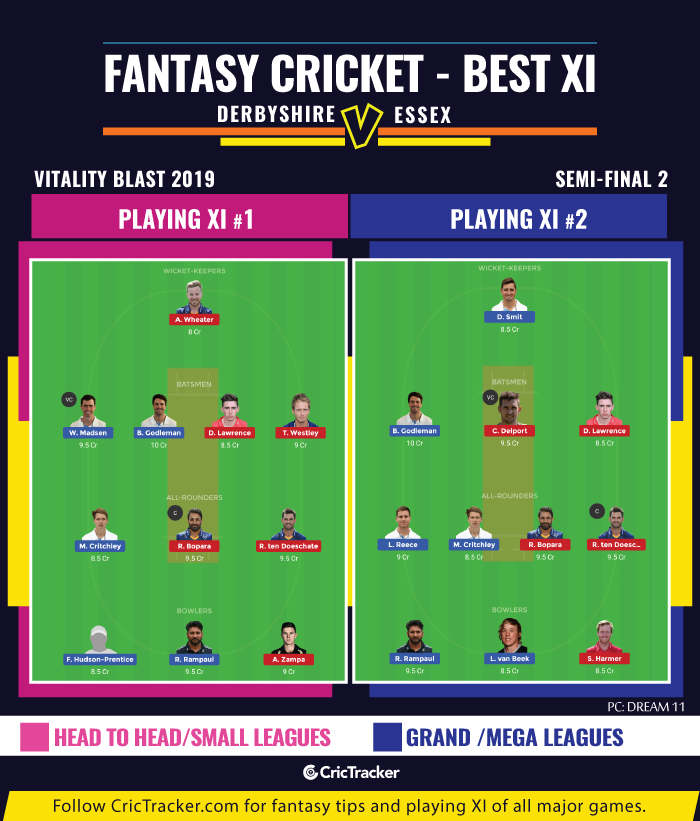 With the pitch expected to be flat, picking top-order batsman could be a crucial punt. Ravi Bopara has been in top-notch form this year with both bat and ball. Make him the captain of your Dream11 side.

It should be a humdinger of an encounter between two closely matches sides. However, considering the form the likes of Bopara and Doeschate have displayed, we back Essex to win this one.