Watch IPL 2020 for Free by subscribing to any yearly channel packs on YuppTV. 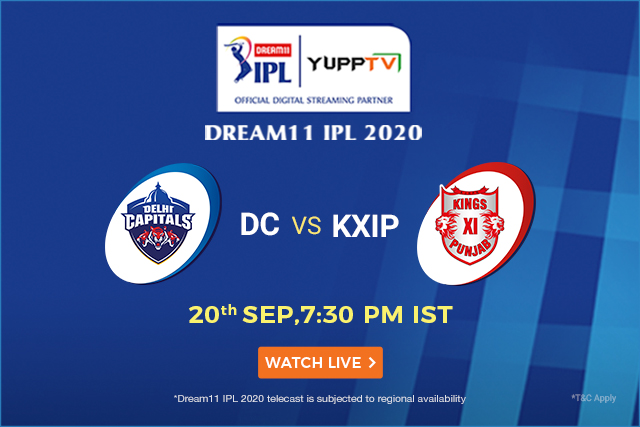 The most exciting IPL 2020 has begun with a bang with the 2019 Finalists Chennai Super Kings and Mumbai Indians playing the inaugural match in the Sheikh Zayed Stadium, Abu Dhabi. Chennai Super Kings under the leadership of MS Dhoni has seized the first victory of IPL 2020 marking the spectacular inception to the tournament.

The second match of IPL is scheduled in the Dubai International Cricket Stadium, Dubai between Delhi Capitals and Kings XI Punjab. The match is going to begin at 7:30 IST and can be watched Live on YuppTV from Australia, Continental Europe (except UK & Ireland), Malaysia, Sri Lanka, Pakistan, South, and Central America, Central Asia, and South East Asia (except Singapore).

One of the youngest teams of IPL 2020, Delhi Capitals is headed by Shreyas Iyer. The team comprises players like Ajinkya Rahane, Rishabh Pant, Shikhar Dhawan, Shimron Hetmeyer, Ravichandran Ashwin, Axar Patel, Marcus Stoinis, Alex Carey, Kagiso Rabada, etc. Carrying the experience of the likes of Shikhar Dhawan, Rahane, and Ashwin, and the hot-headedness of young players, Delhi Capitals is the most balanced team in IPL 2020. If they succeed to perform well as a team, they might be lifting the Trophy this year.

KXIP Franchise chose their players carefully and spent a lot in bagging the best international cricketers. With the presence of destructive batsmen like Chris Gayle, Glenn Maxwell, and KL Rahul, and Bowlers like Mujeeb Ur Rahman, Sheldon Cottrell and Shami, the team just might get well deserving victory right in the beginning.

Looking at both the team’s compositions, it is tough to predict the outcome of today’s game. It could be a nerve-wracking edge of the seat action since the players are enthusiastic to put their best foot forward. Given the mix of such young and veteran players in both the teams, one can always expect the bloodiest of battles on the field.

Enjoy the Delhi Capitals vs Kings XI Punjab match Live on YuppTV from the above-mentioned regions. You can watch the entire Dream11 IPL 2020 Live on YuppTV on Smart Televisions, Smartphones, and other internet-enabled devices by downloading the YuppTV App. Watch IPL 2020 for Free by subscribing to any yearly channel packs on YuppTV.