The match is going to be live at 7:30 PM IST and will be streamed on YuppTV in Australia, Malaysia, Continental Europe (except UK & Ireland), Sri Lanka, Pakistan, South and Central America, Central Asia, and South East Asia (except Singapore). 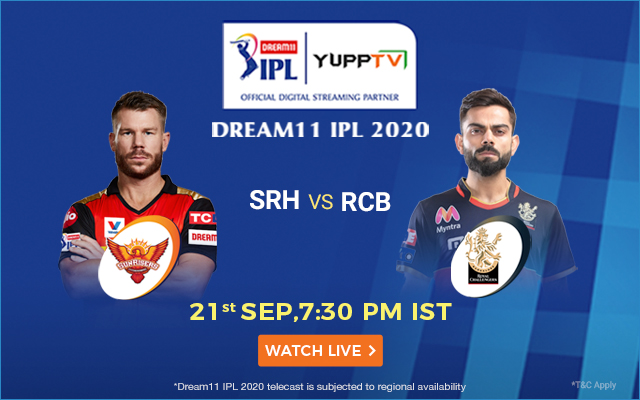 The nail-biting sessions of IPL have come into play with just the second match of IPL 2020 between Delhi Capitals and Kings XI Punjab. With Marcus Stoinis turning the game away from Kings XI Punjab in the last two overs to Mayank Agarwal’s amazing 89, the second match went on to the super over causing the viewers again to clutch to their hand rests anxiously. Delhi Capitals won that battle with much effort and claimed their much deserving first victory in IPL 2020.

The third match of IPL 2020 is between two hot favorites of the season, the Sunrisers Hyderabad and the Royal Challengers Bangalore. Expectations on these two teams have always surpassed the basic strata in every season not just because of the players included but because of their captains. SRH has David Warner leading them this season and RCB always had the current Indian captain Virat Kohli.

The teams have always performed well and with vigor but while SRH managed to win the Trophy twice and reach the finals once, RCB managed to enter the finals thrice. A notable point in the history of IPL is that both the times SRH (previously Deccan Chargers) had claimed the Trophy, RCB was the runner up. The two teams, despite their victory and loss stats, are a hot favorite among the audience and will always garner some of the highest numbers in viewership among IPL tournaments.

Sunrisers Hyderabad currently has a fantastic team with Australian Cricketer David Warner leading them and players like Kane Williamson, Manish Pandey, Jonny Bairstow, Mitchell Marsh, Mohammad Nabi, Bhuvneshwar Kumar, Sidharth Kaul, and Rashid Khan at their disposal. There is not a single person that cannot reiterate David Warner and Jonny Bairstow’s victory laps in the last season. With such amazing players at hand, SRH is one of the top contenders of IPL 2020 and is expected to perform at its best.

RCB on the other hand also has a fine blend of cricketers including Virat Kohli, Ab de Villiers, Aaron Finch, Shivam Dube, Moeen Ali, Chris Morris, Dale Steyn, Mohammad Siraj, Umesh Yadav, Washington Sundar, and Yuzvendra Chahal. This is an amazing list and with Virat Kohli at the lead, there is a good chance that RCB might be at the top of the charts this year. Virat Kohli’s tremendous partnerships with AB de Villiers are ecstatic to watch and that is one of the driving factors of RCB’s popularity.

The two teams composed of the very best players are playing their first match on 21st September 2020 in the Dubai International Cricket Stadium. The match is going to be live at 7:30 PM IST and will be streamed on YuppTV in Australia, Malaysia, Continental Europe (except UK & Ireland), Sri Lanka, Pakistan, South and Central America, Central Asia, and South East Asia (except Singapore).

Download the YuppTV App to watch Dream11 IPL 2020 Live on Smart Televisions, Smartphones, and other internet-enabled devices. You can watch the entire IPL 2020 for Free by subscribing to any of the yearly packages available on YuppTV.