The Sydney Sixers are expected to expand their domination in the points table by running through a depleted Scorchers.

Perth Scorchers will have to be on their top on Sunday in absence of a couple of key players to defeat the Sydney Sixers on their way to seal a spot in final four. The Meg Lanning-led Scorchers have won six of their 11 matches thus far and are placed at No.4. They will need at least two wins from their last three games to secure their berth for the next round. However, against the mighty Sydney Sixers, the Perth Scorchers will take the field in the absence of their stars Elyse Villani and Nicole Bolton.

Villani, who caught up a hamstring injury, will be replaced by Bhavi Devchand, the Local Replacement player. The Technical Committee has approved Overseas Replacement player, New Zealand all-rounder Hayley Jensen, to come into the squad for Bolton, who is taking a period of indefinite leave due to personal reasons. Sixers, on the other hand, remain on top of the table after the Sydney Thunders’ game against Melbourne Stars was washed out. They will be touring Hill Park with an unchanged squad.

The 44th match of the Women’s Big Bash League (WBBL) will be played between Perth Scorchers and Sydney Sixers at the Lilac Hill Park in Perth.

The Lilac Park is quite unpredictable given the way the two matches fared here. The Perth Scorchers recorded the highest successful chase in WBBL history by chasing 180 against the Sydney Thunder. On the very next day on the same pitch, they clinched a thriller by one run while defending 125 as Thunder made only 54 runs in the last ten overs when they needed 56 after being 70/2 at end of the 10th over.

The three WBBL games played in the last season at the Lilac Hill Park produced scores between 130 and 145. Scorchers chased down 130 and 138 with six wickets and seven balls to spare but lost by a one-run margin while chasing 145.

Amy Jones has scored only 153 runs from ten matches this season out of which 57 she made in an innings at the start of the season. In the game against Sixers, the England International will get a chance to open the innings. However, picking Jones will be a risky move with Alyssa Healy being available for the keepers’ category.

Both the team captains will start as the first preferred multiplier. Meg Lanning has three 70+ scores in her previous four matches while Ellyse Perry has been consistent with both bat and ball. The likes of Alyssa Perry and all-rounders from both sides fit in as ideal multipliers. 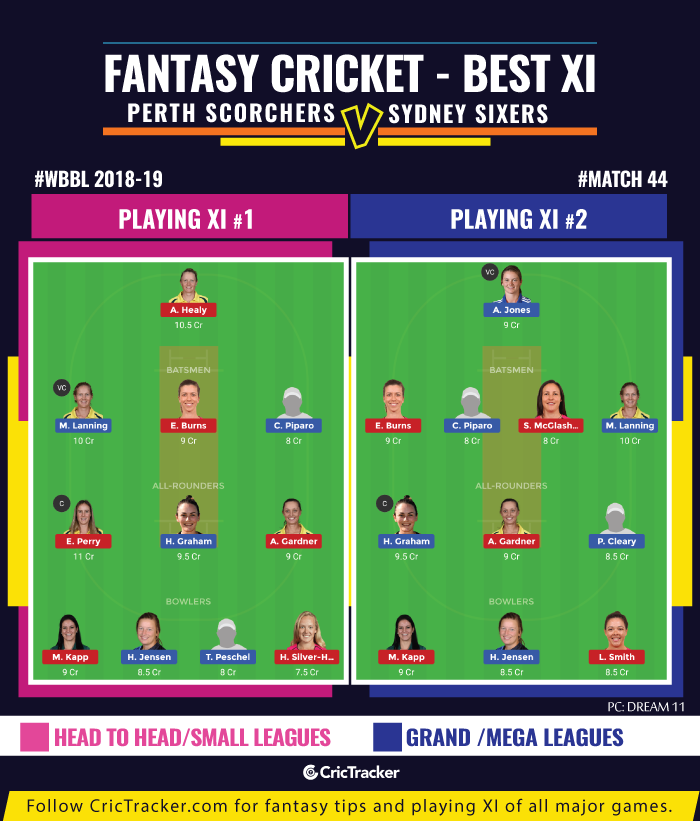 As many as four important players from this game are slotted in the all-rounders category – Elysse Perry, Heather Graham, Ashleigh Gardner and Dane van Niekerk. Based on the credits to be left for the other departments, the all-rounders can be picked and not. Piepa Cleary is a worthy addition and costs only 8.5 credits

The Sydney Sixers are expected to expand their domination in the points table by running through a depleted Scorchers.