Adelaide Strikers are expected to win this fixture against Hobart Hurricanes due to a better depth in the squad.

Adelaide Strikers and Hobart Hurricanes, the two teams out of the final four contention will face off in back to back matches at the Karen Rolton Oval. The Hurricanes are placed at the bottom of the points table with two wins from 11 matches. The Strikers, on the other hand, also have won only two so far and were involved in a washout. They still have an outside chance of finishing in the final four but not without a miracle.

Strikers have to win their remaining four matches and hope there will be a chance for sneaking through with only 13 points. They have got back Tegan McPharlin into the squad in place of the batting all-rounder Eliza Doddridge. McPharlin was granted family leave for her brother’s wedding last weekend. Hurricanes added Ashley Day to their 14-player squad as replacement of Mikayla Hinkley for the two away matches against the Strikers. Pace-bowling veteran, Veronica Pyke is also included into the squad.

The 48th match of the Women’s Big Bash League (WBBL) will be played between Adelaide Strikers and Hobart Hurricanes at the Karen Rolton Oval in Adelaide.

The Park 25 ground in Adelaide has been renamed to Karen Rolton Oval in honour of South Australia’s Karen Rolton who led Australia to World Cup victories. The venue hosted only WBBL game that too in this season only. Batting first, the Strikers managed only 144/7 while the Melbourne Stars chased it down in 19.3 overs for the loss of six wickets. Scores around 150 can be expected in the game between the Strikers and Hurricanes.

The Hobart Hurricanes have struggled with the bat as only Knight, Mandhana and skipper Moloney have somewhat scored well. Daffara got starts in a couple of matches as well. But Corinne Hall stepped up with the bat twice in previous three games. She earned 67 out of her 150 performance points in this tournament from last three games (35.5, 10, 21.5) only. In those three games, her scores read  37*, 4 and 48.

The all-rounders in form of Devine and Knight will be ideal for the multiplier roles from this game. Bates and Mandhana will come into the scene if the pitch assists the batters. Among the bowlers, Schutt and Phillips can be considered as vice-captain. 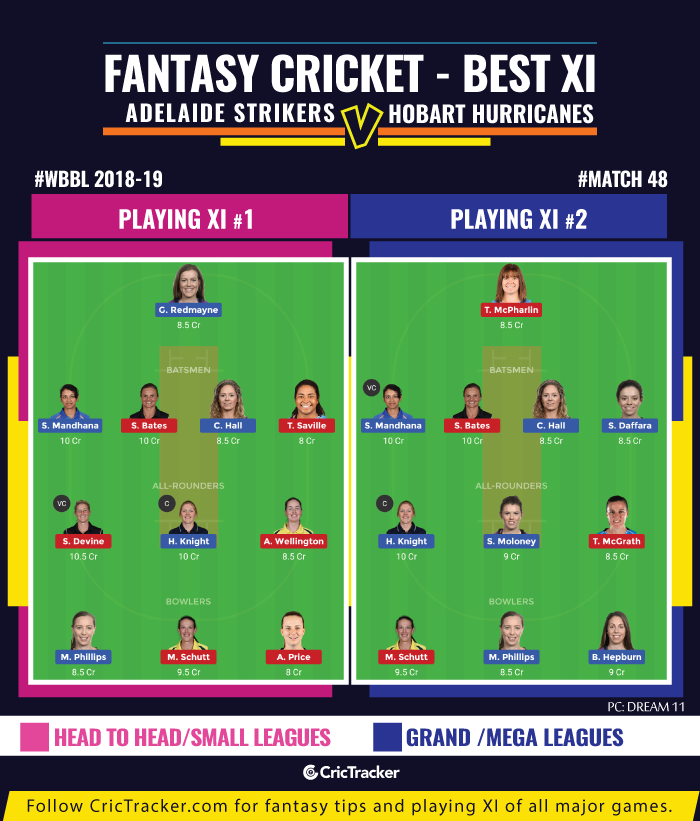 If you want all of Suzie Bates, Sophie Devine, Heather Knight, Megan Schutt, Smriti Mandhana and Georgia Redmayne in the XI, have to settle for some player with a smaller price tag. The less priced players could well turn out ineffective at times.

Adelaide Strikers are expected to win this fixture against Hobart Hurricanes due to a better depth in the squad.