Brisbane Heat is expected to move closer to a final four finish and knock out all possible scenarios that could work out for Melbourne Stars.

Brisbane Heat is one step away from confirming their semi-final berth with seven wins from 12 matches they played this season thus far. A win from the remaining two games could see Brisbane take a better place with 16 points. Perth Scorchers are the only team that could give them a fight as they have 12 points from 12 games. However, the Heat have a positive NRR of 0.887 while Scorchers have a negative NRR of 0.555.

The Melbourne Stars, on the other hand, need a miracle to go through with a win in the remaining two matches as they have only 9 points in their bag. The Stars have included New Zealand International Katey Martin in their 13-player squad for this big match. Martin comes into the squad as a Replacement Overseas Player for Georgia Elwiss, who is unavailable for the remaining two matches due to ECB commitments. The Brisbane Heat wouldn’t want to tinker given their winning form.

The 50th match of the Women’s Big Bash League (WBBL) will be played between Brisbane Heat and Melbourne Stars at the Gabba in Brisbane.

Both Brisbane Heat and Melbourne Stars played at the Gabba this season which is the only other game to be hosted by this venue. The Stars were thumped to a 10-wicket win as the hosts’ opener Grace Harris scored the fastest century in WBBL in only 42 deliveries. This game will be played before the BBL game between Brisbane Heat and Melbourne Renegades. So expect a high-scoring game between the Heat and Stars.

Annabel Sutherland, the daughter of James Sutherland made a name of her with good performances in the WBBL. The 17-year-old scored 100 runs across nine innings and claimed six wickets from 12 matches and gave away runs at an economy of only 6.67.

Sophie Devine and Mandhana will be the key yet again after a good game on Tuesday. These two have to be the first preferred multiplier options. Among the bowlers, Schutt and Phillips can be considered as vice-captain. Knight’s performances have been poor of late but a risk can be taken with her. 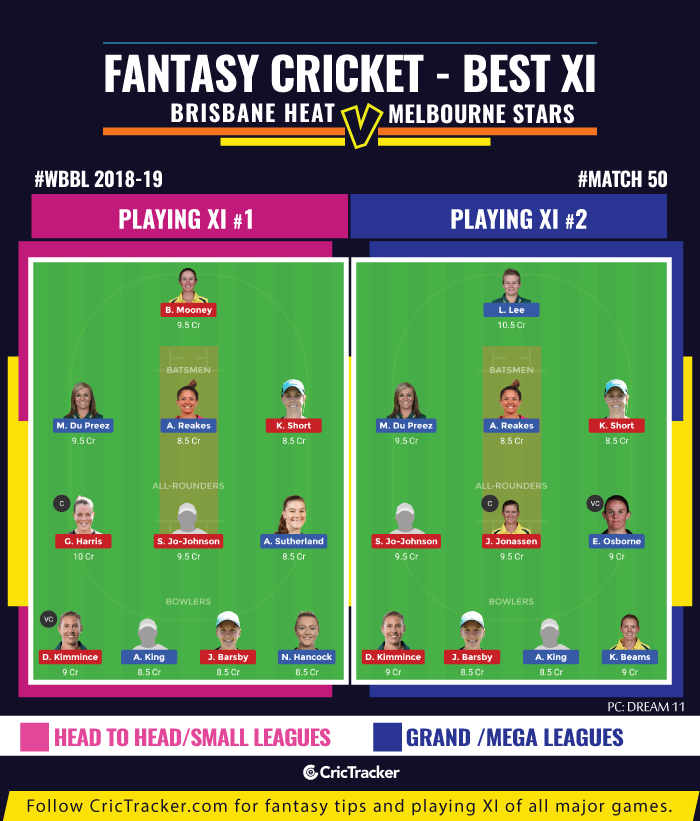 The all-rounder’s category has five potential picks that could turn the game. Considering their recent consistency, the three players who can be picked from this game are Sammy Jo-Johnson, Grace Harris and Annabel Sutherland. The likes of Jess Jonassen and Erin Osborne have had a couple of poor outings of late but can do a lot of damage on their day.

Brisbane Heat is expected to move closer to a final four finish and knock out all possible scenarios that could work out for Melbourne Stars.