Kavindu Nadeeshan has picked up as many as 13 wickets from four matches with help of two 4-wicket hauls.

This game can be viewed on West Indies Cricket YouTube Channel and on Fan Code app in India.

The West Indies Under-19s started the tournament with a 36-run win against the England Under-19s in the first match. However, they lost all the four matches they played since then and missed out on a spot in the final. The promising West Indies team has failed to live up to the expectations with which they ended the tournament. Their campaign comes to an end on Tuesday where they face the Sri Lanka Under-19s. Both Sri Lanka and England have won three matches apiece thus far. The two teams will clash off in the last league match on Thursday and in the final against on Saturday.

The Coolidge Cricket ground is expected to be under clouds throughout Tuesday but no rain is expected during the match timings.

The Coolidge Cricket Ground hosted two Youth ODIs thus far; both in the ongoing Tri-Series. The track here is already playing better than the pitch at the Sir Viv Richards Stadium in Antigua. The game between Sri Lanka and West Indies witnessed a 230+ total by the batting first team. None of the five matches at the North Sound recorded even one total of 180.

Kavindu Nadeeshan has picked up as many as 13 wickets from four matches with help of two 4-wicket hauls. Nipun Dananjaya scored 142 runs across four innings at an average 71. Matthew Forde is the leading wicket-taker for the West Indies with 8 wickets while their skipper Kimani Melius is the only player with 100+ runs in the tournament. Navod Paranavithana is yet to make a mark in this tournament. He has failed with the bat while didn’t get chance to bowl too many overs. 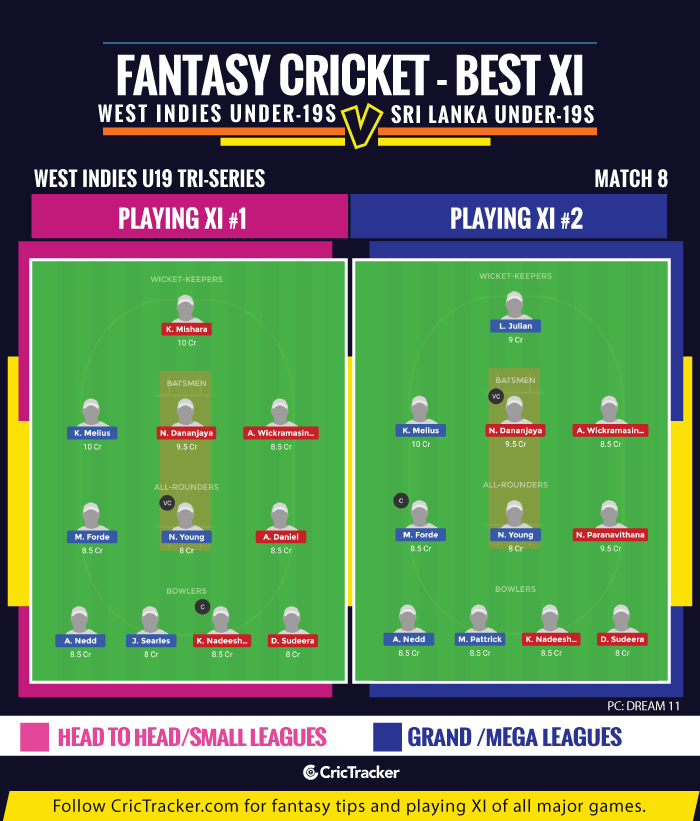 West Indies Under-19s are expected to finish their campaign in this U19 Tri-series with a win.