Both England U19 and Sri Lanka U19 have won three out of their five games in the series.

The 8th game of the West Indies U19 Tri-Series will be played between England U19 and Sri Lanka U19 at the Coolidge Cricket Ground in Antigua.

As the Under-19s Tri-Series draws to its conclusion, England Under-19s and Sri Lanka U-19 lock horns in the last league match of the series before the final. As both teams have already qualified for the finals, we could possibly see a shuffled squad of the two sides. Both England U19 and Sri Lanka U19 have won three out of their five games in the series.

England Under-19s showcased a strong bowling performance in their last match as they dismantled Sri Lanka Under-19s batting force. After dismissing the Lankan side at the score of 113, George Hill and Co raced to the target in just 33 overs. Dan Mousley steered his side to the target by scoring 43 runs off 62 balls.

George Balderson emerged as the top performer for his side after scalping three wickets in his spell. He was joined by Scott Currie, who also scalped three wickets while conceding 18 runs in his spell. England Under-19s will be looking forward to delivering a similar performance ahead of the series-final. On the other hand, Sri Lanka Under-19s will be hoping to redeem themselves before stepping into the finals.

The Coolidge Cricket ground is expected to be partly cloudy. The temperature is expected to hover around 26 degrees Celcius along with high levels of humidity.

The Coolidge Cricket Ground hosted three Youth ODIs thus far; both in the ongoing Tri-Series. The previous match between West Indies Under-19s and Sri Lanka Under-19s saw both the teams cross the 200-run mark. The wicket is expected to attract massive totals.

England’s bowling duo of Balderson and Currie had dismantled the Lankans in the previous match. They are expected to replicate their performance. Dan Mousley has also delivered performances for his side. He has scored 140 runs in his last five matches. Kavindu Nadeeshan has been the pick of the bowlers for Sri Lanka Under-19s while their batting force has been steered by Nipun Dananjaya. 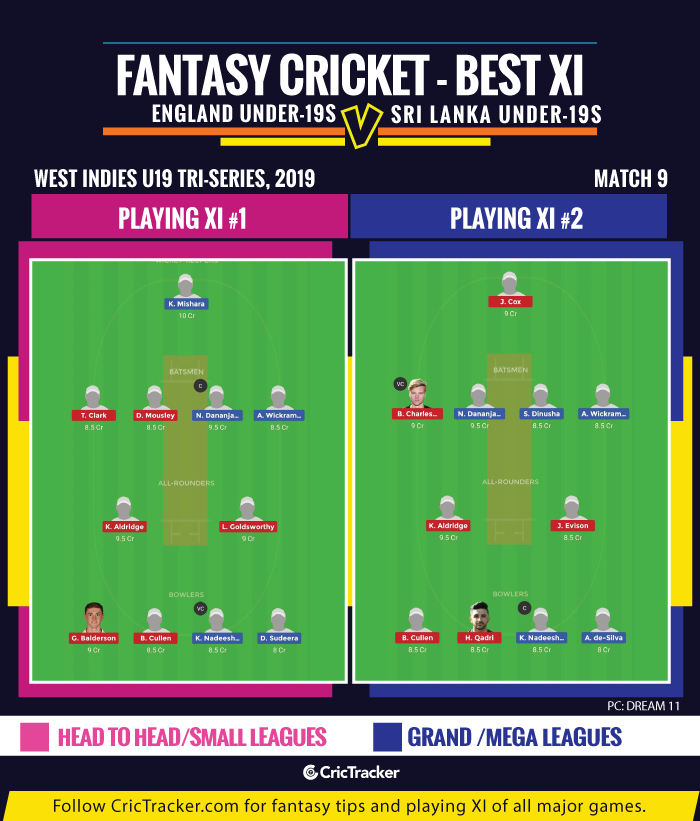 Both teams are expected to make changes in their line-up ahead of the much-awaited final. Hence, keep an eye on the starting squad before the start of the match. A full-strength team might not be on the cards.

England Under-19s are expected to win.