Mitchell Starc took five wickets for just for 48 runs in the first ODI against West Indies.

Often a change in the format brings good luck to the team. Well the saying rung true for Australia as they put behind their horror show in the five-match T20I series against West Indies and started with a bang in the first ODI by winning the match by 133 runs in a rain-curtailed game of 49 overs each.

Alex Carey got off to a dream start on his captaincy debut and took the additional responsibility of anchoring the innings too by top-scoring for the team with patient 67 runs and helped Australia post a competitive score of 252 on the board. West Indies who are known as good chasers, floundered during the run-chase as Mitchell Starc and Josh Hazlewood blew the home side to smithereens and bundled them to just 123.

The chase never seemed to take off for West Indies as they were reduced to 27 for six at one stage. But they quickly have to put that horror performance away, as they will play the second ODI on Friday (23 July).

While generally, the chasing team finds it a bit easier to bat second on this particular pitch, West Indies struggled against the pace of Starc and Hazlewood in the first ODI. But still, the home side will fancy themselves while chasing as they generally have a good track record. While persistent rain marred the first game, the forecast predicted is much better for the second game.

The responsibility to shoulder the batting line-up again rests on Carey’s shoulders. He paced his innings well while scoring 67 in the first ODI and was there till 44 overs. He will look to continue with the same momentum and help Australia seal the series in the second game itself. With an average of 37.35 in 43 matches, the southpaw has started his ODI career on a bright note indeed.

Starc loves the ODI format. In just 97 ODIs, he has taken an astonishing 189 wickets at a staggering average of 22.81. He showed his class by picking five wickets and bagged the player of the match award too. The left-arm pacer is not only lethal with the new ball but equally potent with the old ball as well. Again the onus of picking early wickets for Australia will rest on Starc. 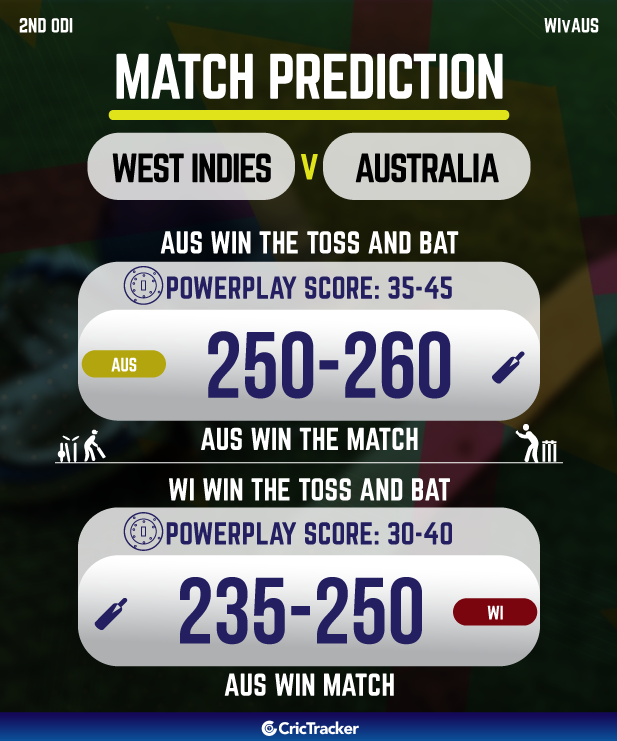