West Indies vs England, 1st T20I Match Prediction – Who will win the match?

West Indies vs England, 1st T20I Match Prediction – Who will win the match?

Will England be able to start the T20I series on a high?

West Indies and England will face each other in first of the five-match T20I series on Saturday. Not much cricket has been played in the format by England after the T20 World Cup where they reached the semi-finals but lost to a spirited New Zealand side. However, they will be aware of the thrashing the Test side received down under in the Ashes and a good performance will only lighten up the mood back home for the fans.

The hosts led by Kieron Pollard are under the scanner for long now for their six or nothing approach which hasn’t worked since the T20 World Cup in the UAE. They lost their last T20I series 3-0 against Pakistan and are coming into this contest losing to Ireland in the ODI series. The pressure is certainly on them and England will be no pushovers either. The Caribbeans will have to put their best foot forward to come out victorious in the opening encounter.

Where to Watch:  Fancode

This is somewhat the start of the season in Barbados which means the pitch will be fresh. Expect it to be good for batting while at the same time, spinners might come into action as well. The team winning the toss might look to bowl first and then chase the total later on.

Jason Roy slammed an enterprising century off just 36 balls in the warm-up game and showed he is ready to go bonkers in the series proper. He is anyways an aggressive batter and will be looking to provide a quickfire start to the visitors. With no Jos Buttler at the top of the order, the onus will be on Roy to lead the way for England.

Adil Rashid is rated pretty highly in England and his 74 wickets in 68 T20Is are testimony to that. Eoin Morgan trusts the leg-spinner a lot and certainly, Rashid will test the West Indies batters with his variations. The pitch is likely to help the spinners a bit and a lot will depend on how the home side fares against Rashid. 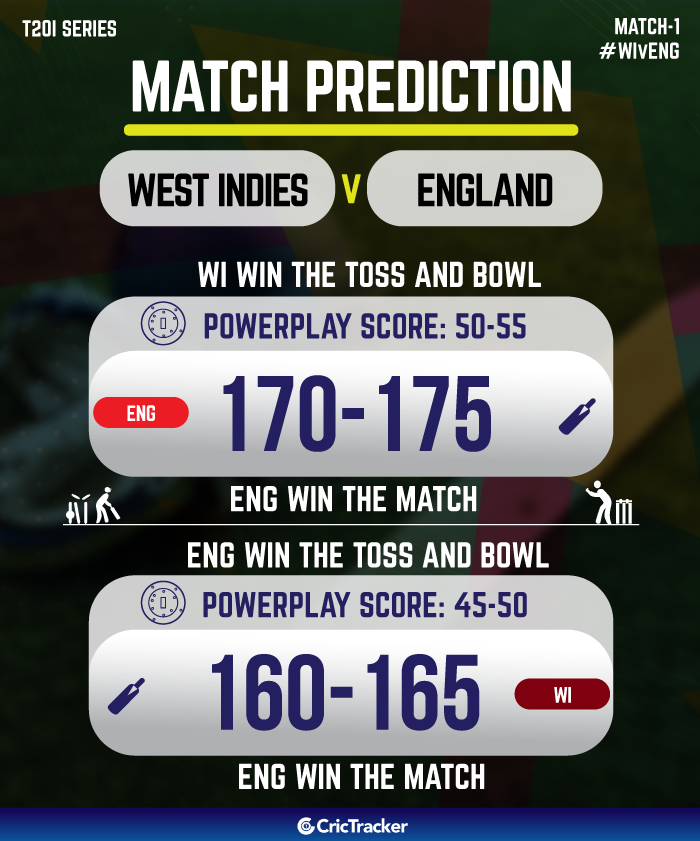