Ireland will see this as an opportunity to upset a strong West Indies team.

West Indies will take on Ireland in the first ODI of the three-match series. The encounter gets takes place at the Sabina Park in Jamaica on Saturday (January 8). With prominent players returning to the side, West Indies are looking a formidable side and are touted favourites for this series. Kieron Pollard will lead the home team, whereas Shai Hope will serve as his deputy.

On the other hand, Ireland will see this as an opportunity to upset a strong West Indies team. Notably, the Irish side didn’t enjoy the greatest of series when they travelled West Indies in 2020. They failed to put up a fight suffered a humiliating 3-0 defeat in the ODI leg. Nevertheless, the visitors have some prominent players in the ranks who can trouble the home team.

As Sabina Park hasn’t hosted a match since a while, the track would be pretty fresh. The pitch tends to favour the fast bowlers in the initial part of the game. Hence, the batters need to tackle the new ball with precision. However, the conditions will ease out for the batters as the game progresses. Hence, the toss-winning captain must elect to bowl first.

Shai Hope belongs to the rare category of West Indies batters, who isn’t known for his brute strength. He instead emphasizes on staying at the crease for long. Owing to the same, he averages over 50 in this format of the game. His strike rate, which is 74.78, is something which can be improved. However, Hope has given West Indies solid starts more often than not in ODIs.

Alzarri Joseph is most likely to top the bowling charts as he has been a wicket-taking machine in ODIs. The right-arm pacer can set the speed-gun on fire and the bucket of variations in his arsenal makes him even more effective. Hence, Ireland batters must beware of him. 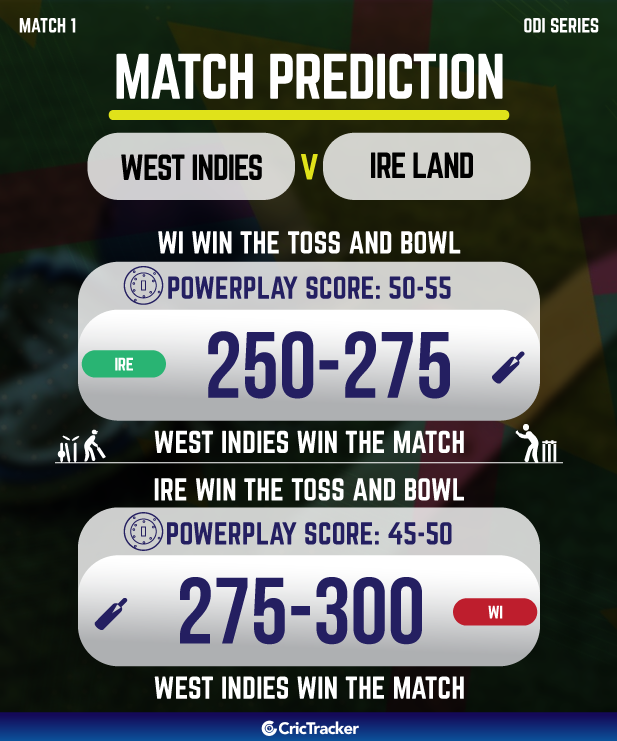