Stirling grabbed the limelight in the first T20I by smashing 95 runs off just 47 balls.

After an enthralling first T20I finish, Ireland and West Indies lock horns in the second clash of the three-match series. Ireland edged out world champions West Indies by four runs in a dramatic first T20I. After posting a massive total of 208/7 on the scoreboard, Ireland narrowly pipped West Indies to clinch the victory by 4 runs.

Paul Stirling stunned the audience with his blistering 95-runs knock to ensure that Ireland post a competitive total on the board. He was also assisted by fellow opener Kevin O’Brien, who scored 48 runs off 32 balls. Coming to West Indies’ run-chase, the Caribbean side were propelled to a flying start by Evin Lewis’ 29-ball 53.

With only 16 runs required off the last two overs, West Indies was expected to clinch the triumph with ease. However, things started going Ireland’s way after Craig Young dismissed Pooran for 26 in the 19th over and gave away just 3 runs.

With 13 needed from last over, Joshua Little dismissed Sherfane Rutherford on the first ball but Bravo retaliated with a six off the second ball to bring the equation down to 7 runs off 4 balls. However, Kieron Pollard and Co. managed to gather only two runs from the next two deliveries to lose the match by 4 runs. After suffering a narrow defeat, the defending World T20I champions will be eager to bounce back to level the series 1-1 in the second T20I.

Considering the performance of batsmen in the previous match, a massive total is expected at the Warner Park. Both the teams were able to touch the 200-run mark in the first T20I. In the six T20I matches played so far at the venue, the chasing side has been triumphant on four occasions. There are no chances of rain whatsoever to intervene in the match and the weather is expected to be mostly sunny. The temperature is anticipated to hover around 26 degrees Celcius with high levels of humidity.

West Indies will be relying on their robust top-order for gathering a massive total on the board. Lendl Simmons, Evin Lewis and Shimron Hetmyer will be bolstering their top-order. All eyes will be on Dwayne Bravo, who has the potential to turn the tables in his side’s favour by his prolific batting and death-overs bowling.

Ireland will be banking on Paul Stirling, who is amongst the most experienced players in the Ireland set-up. Stirling grabbed the limelight in the first T20I by smashing 95 runs off just 47 balls. Ireland also have skipper Andrew Balbirnie and Kevin O’Brien in their batting arsenal.

Joshua Little, who scalped three vital wickets in the first T20I, will be eager to recreate his performance. Craig Young also left his mark in the game by scalping two wickets in his spell. 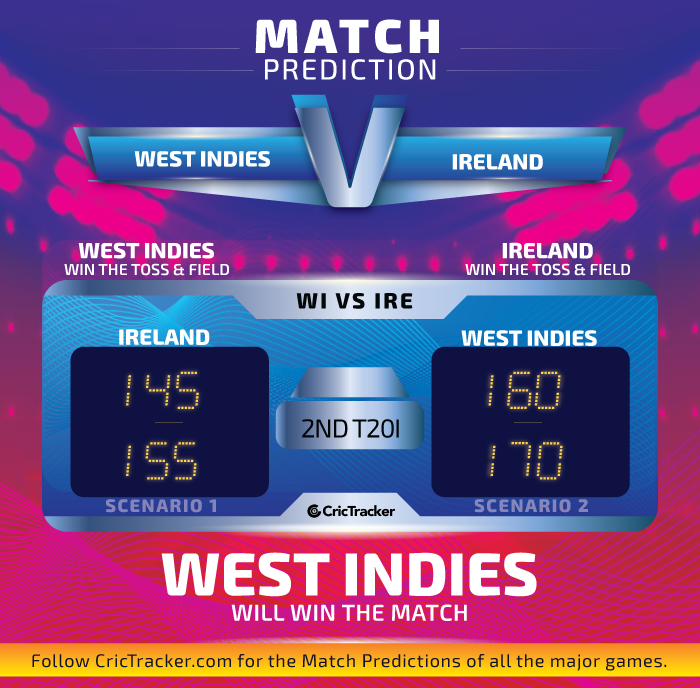