In the previous game, Evin Lewis' half-century blew away the visitors.

West Indies went into the opening T20I against South Africa as the ICC’s number.10 ranked T20I team. However, at the National Cricket Stadium in Grenada, Kieron Pollard and Co played like champions and won by eight wickets to take a 1-0 lead.

They chased down 161 with 30 balls left. The second game is set to be played at the same venue on Sunday, June 27 and the Proteas need a win to avoid a must-win scenario for the last three games.

Temba Bavuma’s men haven’t won a T20I series in 2021 and they would be looking to, desperately, turn their fortunes around on Monday, June 28 at St George’s.

The pitch in Grenada has turned out to be an absolute belter. The Caribbean team managed to smash as many as 15 sixes in their run-chase. The Proteas also churned out some lusty blows, though they strained in the second half of their innings. Batting second should be the way forward as the track isn’t expected to change nature to a large extent.

On Saturday, Quinton de Kock played his first T20I match in 2021. Opening the batting, he smashed 37 runs off 24 balls and laid the platform for the visiting team. In his knock, he amassed two fours and as many sixes.

In the end, it was Andre Russell, who accounted for his wicket just after the mandatory powerplay. The onus will again be on the southpaw to take his team off to a flier

Fabian Allen was one of the star performers for the Caribbean team, though he didn’t the Player of the Match award. In four overs, he picked up the crucial wickets of Reeza Hendricks and Temba Bavuma, who both had gotten their eyes in.

Moreover, the left-arm spinner bowled at a frugal economy rate of 4.50, meaning that runs were hard to come by off his bowling. 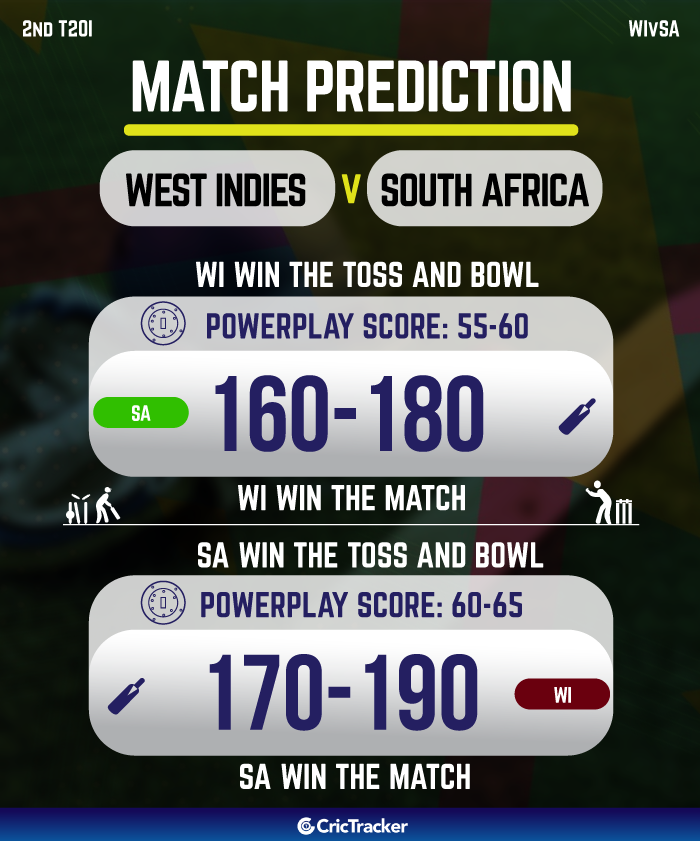