The Proteas will be looking to take an unassailable 3-1 lead on Thursday.

South Africa have made an incredible comeback in their five-match T20I series against West Indies. After losing the opening match by five wickets with 30 balls left, Temba Bavuma and Co have secured a 2-1 lead.

In both their previous two matches, the Proteas did extremely well while defending. In the last match, the visitors won by one run after posting 167 on the board.

The fourth and penultimate game of the series is scheduled to be played on Thursday, July 1. It’s a must-win affair for the Caribbean team. For South Africa, it’s a chance to wrap up the series with one match remaining.

The pitch in Grenada has been a sporting one thus far. Scores around the 170-run mark have been completive. The spinners and pacers have also extracted quite a bit from the surface.

The Caribbean team might not want to chase keeping in mind the results of the previous two matches. There are chances of rain during the course of the match and hence, there could be delays.

Quinton de Kock has been the standout batter from either side. The southpaw has scored 135 runs at an average and strike rate of 45 and 142.10. After missing out on half-centuries in the first two games, the left-hander hit 72 in the third match.

He will be looking to churn out another substantial knock and take the Proteas to an unassailable 3-1 lead in the series.

Obed McCoy has been the standout bowler in the series without a doubt. The left-arm seamer couldn’t get a wicket in the first game, but he has, well and truly, made amends.

In three matches, McCoy has churned out seven wickets at an economy rate of 6.41. In the previous match, he picked up a four-wicket haul and gave an account of the damage he can do. 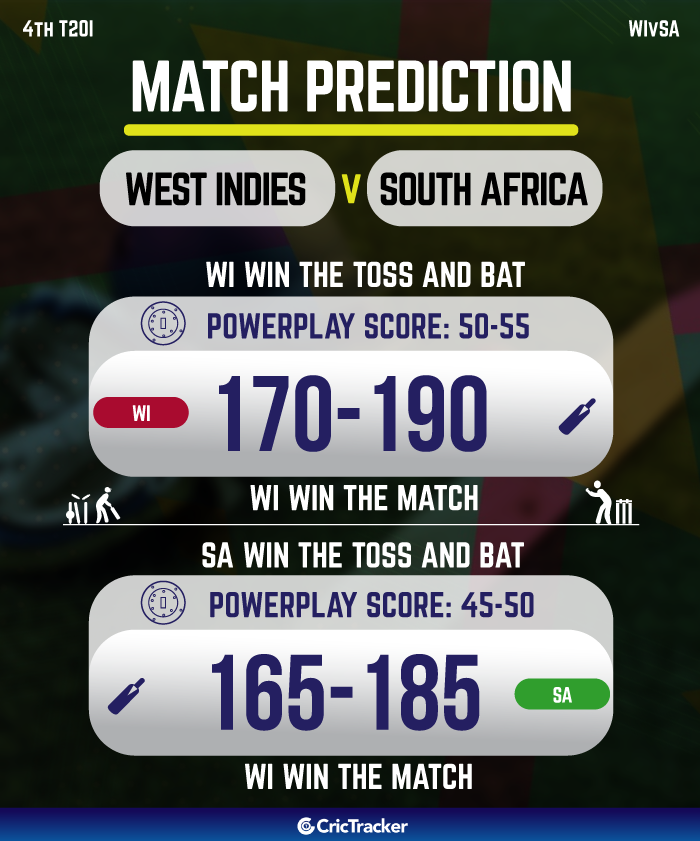