The teams, batting second have lost the last three matches in Grenada.

The decider of the T20I series is scheduled to take place on Saturday, July 1. The Caribbean team lost the Test series and the hosts would want to take home the T20 trophy.

As far as the Proteas are concerned, their batting has looked jittery barring Quinton de Kock’s heroics. It’s their bowlers, who have pulled them out of rabbit in both of their two wins in the T20I series.

The pitch in Grenada is expected to be a sporting one thus far. The batters have been able to play their shots on the up. The track has also been helpful to the spinners as shown by Tabraiz Shamsi, George Linde and Fabian Allen. Batting first should be the way forward as chasing has been a tad tough in the last three games.

Quinton de Kock has performed exceptionally in the series thus far. The left-handed batter has notched 195 runs at an average and strike rate of 48.75 and 141.30 with two half-centuries to show for his efforts.

But he needs support from the other end as well. The southpaw can’t afford to drop his guard if South Africa have to make a comeback and win the series decider.

Dwayne Bravo might be at the fag end of his career, but he hasn’t run out of steam by any stretch of the imagination. In four matches, he has picked up nine wickets at an average of 11.44.

His economy of 6.86 is also the best among his teammates. In the previous game, he got four scalps for 19 runs and showed his class. Not to forget that he’s more than a handy batter. 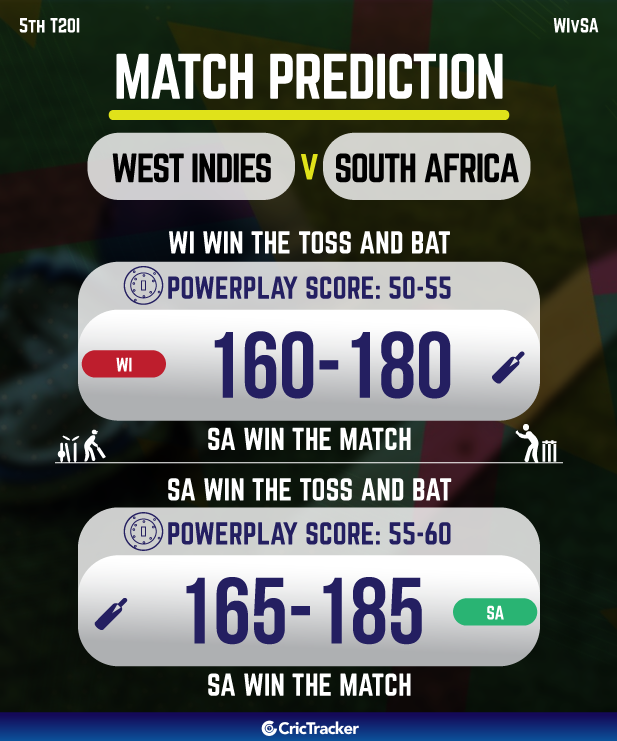