The Australian keeper Alyssa Healy will be ideal in the fantasy cricket as captain or vice-captain.

The 1st game of the 3-match T20I series between West Indies Women and Australia Women will be hosted by the Kensington Oval in Bridgetown, Barbados.

The game will be live on Windies Cricket’s YouTube channel.

The 2018 Women’s T20 World Cup champions Australia will clash off the 2016 champions West Indies in a 3-match T20I series commencing on Saturday in Barbados. It was Australia Women whom the West Indies Women defeated in 2016 final to emerge as the champions. The Australian avenged for the loss in the 2018 semi-final by defeating the Caribbean team in their backyard.

The difference in strengths between these two teams has increased over the last couple of years. Moreover, the West Indies Women are missing some of their big names on the current tour. The hosts ended up with scores between 130 and 180 during their 3-match ODI series whitewash. The Aussie Women could well score as many as those or even more in the T20Is and bag comfortable wins.

Barbados is expected to be under the sun for the majority of Saturday without any cloud covering. However, from 5 PM local time, there is a possibility of showers which is two hours before the scheduled start of play. The chances are quite less and the rain carrying clouds could go away without interrupting the match.

The Kensington Oval hosted only one Women’s T20I over the last five years. West Indies Women posted 124 during the last year’s T20I against South Africa Women. The hosts won the game by 17 runs due to the wickets they picked with the new ball. However, Australia Women’s quality hardly depends on the pitch. They could be seen posting 180+ easily and also chase targets of 110-120.

Kycia Knight suffered a lower back injury in the first ODI and has been replaced by Britney Cooper.

Alyssa Healy has impressive numbers with the bat in the Caribbean. During the last year’s WT20, she scored 45+ in four consecutive innings before making only 22 in the final. In the ODI series this week, she scored a century and two fifties. Ashleigh Gardner could well produce a perfect all-round effort if she gets a chance to bat higher. Sheneta Grimmond has a couple of quick knocks while batting in the lower order.

Considering the record in West Indies, batting form and batting position, the Australian keeper Alyssa Healy will be ideal in the fantasy cricket as captain or vice-captain. 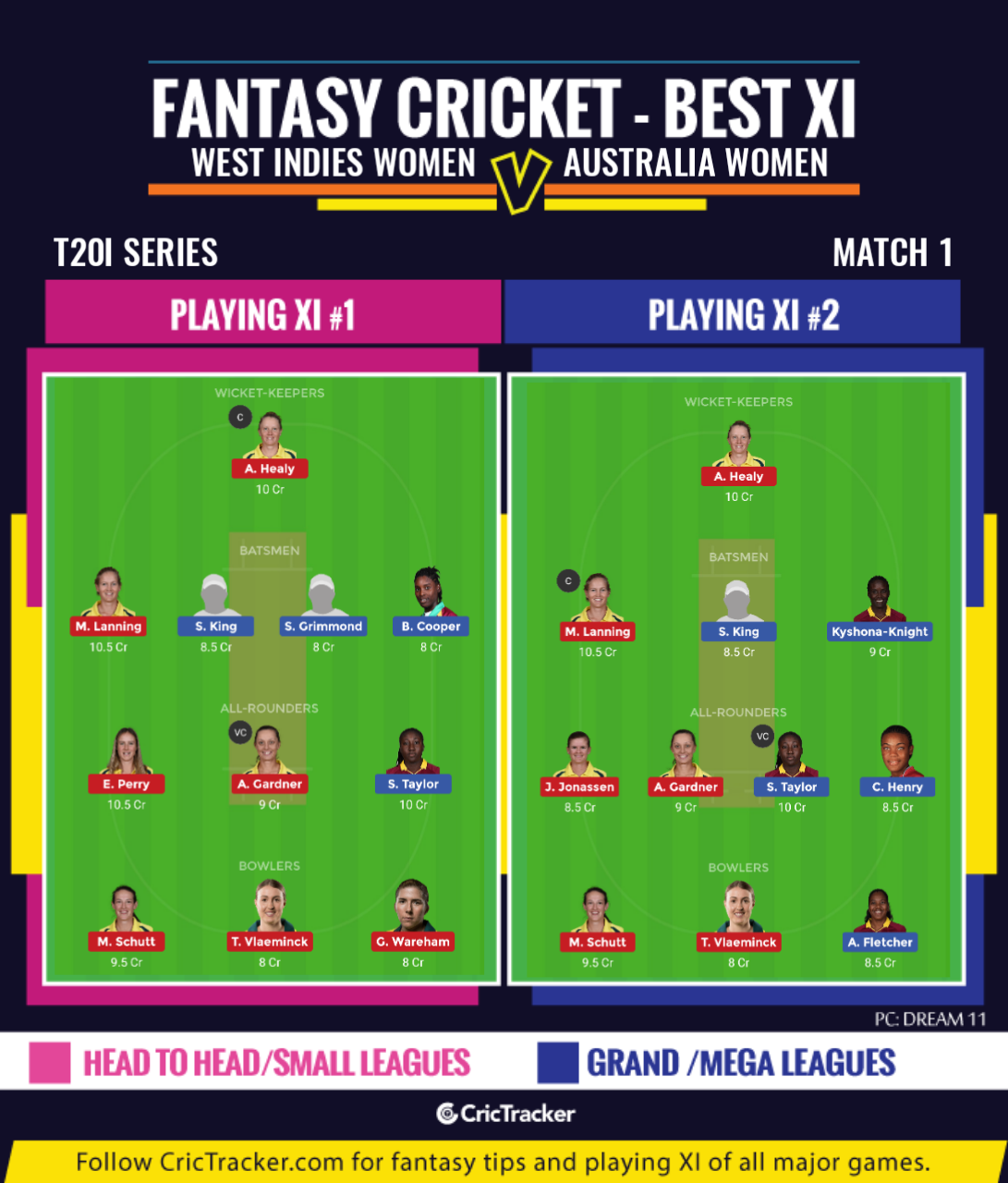 Ellyse Perry’s fantasy potential gets reduced as she bats at No.5 or lower most of the time in T20Is. Her role is restricted to a couple of overs with the new ball where she could take a maximum of 2 wickets. This is quite less return for her value of 10.5 credits which forces to pick players of 8 credits for balancing.

Australia Women are expected to continue their winning run in the Caribbean.