All the statistical highlights from India Women’s big win in the first T20I against the West Indies.

India Women continued their good run in T20Is in the Caribbean as they thumped the West Indies Women by a huge 84-run margin in the first game of the 5-match T20I series. Smriti Mandhana (67) and Shafali Verma (73) shared a record 143-run stand for the 1st wicket as India posted 185/4 in their 20 overs. The 15-year-old Shafali was pretty aggressive in the powerplay as India crossed 100-run mark before halfway stage. Skipper Stafanie Taylor’s absence hurt the home team as they were restricted for just 101/9.

All the statistical highlights from India Women’s big win in the first T20I against the West Indies:

2014 – The last instance of India Women defeating West Indies in a T20I was way back in 2014 WT20. In these five years, India played the West Indies Women four times in this format, all in 2016 and were defeated in all the four matches.

84 – The 84-run win in this match is India’s 2nd biggest win in terms of runs in Women’s T20I cricket. Their highest was by 140 runs against Malaysia in 2018 Asia Cup T20. In their previous T20I match, India Women lost to South Africa Women by 105 runs; their biggest T20I defeat in terms of runs.

More records for the Indian team:

143 – The opening partnership of 143 between Smriti Mandhana and Shafali Verma is the highest for India Women for any wicket in T20I cricket. Their previous biggest partnership was 134 between Harmanpreet Kaur and Jemimah Rodrigues exactly one year ago on November 9th.

The duo added 134 runs for the 4th wicket in the last year’s WT20 opening game against New Zealand. These two stands by Indians lead the list of highest Women’s T20I partnerships for any wicket in the West Indies.

Younger than the likes of Mithali and Tendulkar:

15y 285d – At the age of 15 years and 285 days, Shafali Verma became the youngest Indian at the time of maiden fifty in International cricket across Men’s and Women’s cricket. The previous youngest was Thirush Kamini who was 16 years and 138 days when she scored an unbeaten 60 against Sri Lanka in 2006. 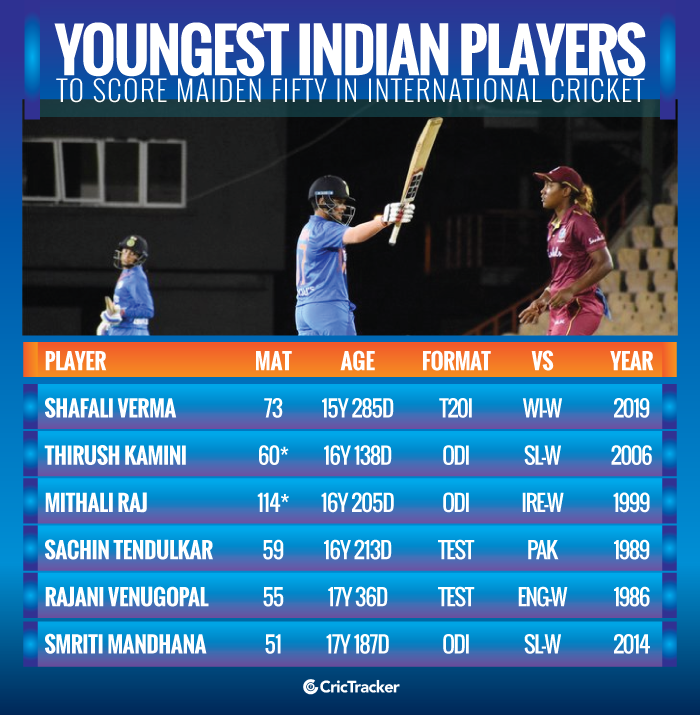 Nearly the World record for Shafali:

15y 285d – Shafali Verma became the 2nd youngest to score a fifty in the T20I format across Men’s and Women’s cricket. Kavisha Egodage of UAE was 15 years and 267 days old when she scored 57* against Malaysia earlier this year. Shafali could have broken the record last month when she scored 46 in only his 2nd T20I.

73 – Only one player in the history of International cricket across Men’s and Women’s cricket recorded a higher score than Shafali’s 73 before turning 16. South Africa Women’s Johmari Logtenberg was only 14 years and 166 days when she scored 74 on her Test debut against England in 2003. Later in 2004, Logtenberg scored 76 in an ODI against England shortly after turning 15.