Smriti Mandhana averages more than 40 in the Caribbean Islands in the T20I format.

The 2nd game of the 5-match T20I series between West Indies Women and India Women will be hosted by the Daren Sammy National Cricket Stadium in Gros Islet, St Lucia.

India Women thrashed the hosts by a record margin to take 1-0 lead in the 5-match T20I series. The opening pair of Smriti Mandhana and Shafali Verma done the damage by scoring fifties. Their record partnership helped India to finish with 185/3 in their 20 overs. The home side hardly had a chance in winning this game as Stafanie Taylor was ruled out of the game due to an injury. As a result, they finished with only 101/9 in the 20 overs. The Indian spinners did the damage after Shikha Pandey handed the key wicket of Hayley Matthews.

There are pretty good chances of rain in the first half of Sunday in St Lucia. However, things are expected to get clear from 2 PM local time, shortly after the scheduled start of play.

India posted a huge total in the first T20I but the same might not be seen again on Sunday. The venue has often seen big scores whenever there was a clearly superior team among the two. On Saturday night, it was the Indian team which was superior and it was more due to the absence of the home team skipper. If India bat first again, they could end up with 160+ but the West Indies team could be restricted to only 120.

Stafanie Taylor didn’t play the first match of the series.

Smriti Mandhana is enjoying her batting in the Caribbean Islands. She was among the top run-getters in the 2018 WT20 and now has two fifties in two matches played on this tour. Hayley Matthews will be crucial with both bat and ball for the hosts if they have any chance of levelling the series. Shikha Pandey has been in brilliant form over the last month with the bat. The spin twins Poonam Yadav and Radha Yadav take wickets as regularly as any other pair in T20Is. Afy Fletcher is a consistent wicket-taker for the West Indies.

Smriti Mandhana averages more than 40 in the Caribbean Islands in the T20I format. 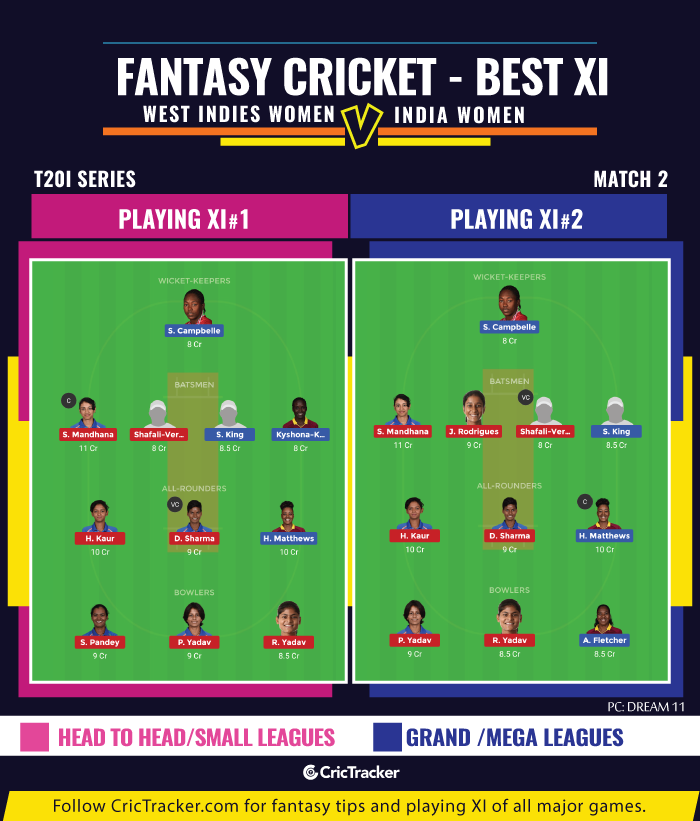 Stafanie Taylor missed the first T20I due to an injury which was confirmed by a tweet from West Indies Cricket. With the 2nd T20I played inside 18 hours of the first match, we might see her playing this game either. If she does play the match, she can be fitted in place of Harmanpreet Kaur as the Indian captain didn’t bowl much during the first T20I.

India Women are expected to complete a series win.