Which teams have finished last on points table each IPL season?

Which teams have finished last on points table each IPL season?

RR finished last for the first time in IPL history.

The 13th edition of the Indian Premier League is nearing its end and teams are striving hard to make it to the next stage of the competition. While Mumbai Indians (MI) is the only team to cement its place at the top of the points table in IPL 2020, we also have our bottom 3 in the form of Rajasthan Royals (RR), Chennai Super Kings (CSK) and Kings XI Punjab (KXIP).

The rest four teams including Royal Challengers Bangalore (RCB), Delhi Capitals (DC), Sunrisers Hyderabad (SRH) and Kolkata Knight Riders (KKR) are still fighting to claim three spots available in the playoffs. It is every team’s ambition to win the coveted Trophy but only one team can do it each year.

Also, in every season, there is a franchise that has a horrible tournament and finishes the league stage at the bottom of the points table. Now-defunct Deccan Chargers had a forgettable start to their run in IPL 2008 as they grabbed the last spot with just two wins that came against Mumbai Indians and Chennai Super Kings.

In 2009, it was the Kolkata Knight Riders (KKR) that replaced Deccan Chargers as the wooden-spooners with just three wins and ten losses. In the 2010 edition, it was the Kings XI Punjab that had a season to forget as they finished bottom of the table with only 8 points under their belt.

Delhi Daredevils occupied the last spot in IPL 2011 with just 9 points despite having players like Virender Sehwag in their team. IPL 2012 saw now-defunct Pune Warriors India starting their campaign with two wins on a trot but failed to maintain the initial momentum and won only two more matches that season. Thus, they finished last with 4 wins and 12 losses in 16 matches.

Speaking of the 2013 and 2014 edition of the T20 extravaganza, Delhi Daredevils had a horrible run as they finished at the bottom of the points table in both the editions with just 6 and 4 points respectively. While they were soon followed by KXIP who were the wooden-spooners in IPL 2015 and IPL 2016 grabbing just 6 and 8 points.

In 2017, Royal Challengers Bangalore graced the last position for the first time as they managed to win just three games while one fixture resulted in a tie. Delhi were again at the bottom of the points table with 10 points in IPL 2018 while RCB finished last in IPL 2019 with 11 points.

IPL 2020 witnessed Rajasthan Royals gracing the last spot for the first time in the history of the league with 12 points.

There are two teams (of the original 8) who have never finished rock bottom i.e Mumbai Indians and Chennai Super Kings. Delhi Capitals (formerly known as Delhi Daredevils) carry the unfortunate tag of bagging the last spot on 4 occasions, which is a record. 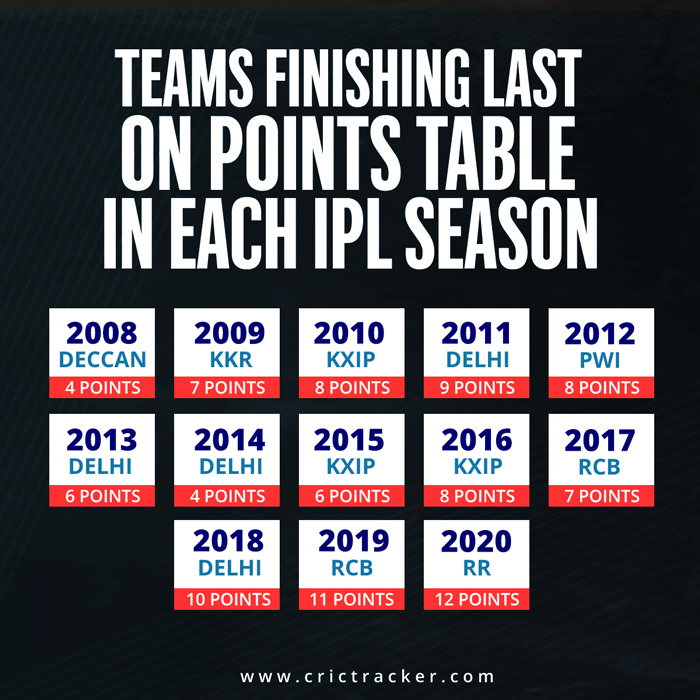