T20 Blast 2022: Who will win today’s match between Yorkshire and Nottinghamshire

T20 Blast 2022: YOR vs NOT Match Prediction – who will win today’s match between Yorkshire and Nottinghamshire?

Both teams have a strong batting line up and it will be an exciting contest to watch.

Two strong-looking teams in the form of Yorkshire and Nottinghamshire will take on each other in their next group stage encounter of the 2022 T20 Blast. The match will be played at the Headingly, Leeds on June 6 (Monday). Both teams are studded with some powerful batters and it is expected to be a cracker of a contest.

Talking about their standings in the North Group points table, Yorkshire are currently placed third with two wins in five matches. Meanwhile, Nottinghamshire have also won two matches but are placed in the fifth spot. With the tournament still in its initial phase, both teams will want to give their 100% and try to win matches upfront.

The pitch at Headingly, Leeds is a batting paradise. Both teams managed to breach the 200-run mark in the last match played on that ground. The skipper winning the toss might want to bowl first and try to chase down the target later on. Bowlers need to vary their pace if they want to stop the run flow during the course of the match.

Prominent batter Alex Hales was excellent against Derbyshire recently. Hales smashed 91 runs in just 33 balls and played at a demolishing strike rate of 275.76. The right-handed batter also smashed 12 fours and five sixes to set the perfect base for his team. The English batter will look to emulate his performance ahead as well.

Veteran England spinner Adil Rashid might play a key role in his side’s success in the upcoming match. The experienced spinner has a lot of tricks in his books and also varies his pace to confuse the batters. Adil Rashid will want to grab some key wickets in the next encounter and try to win the match for his team. 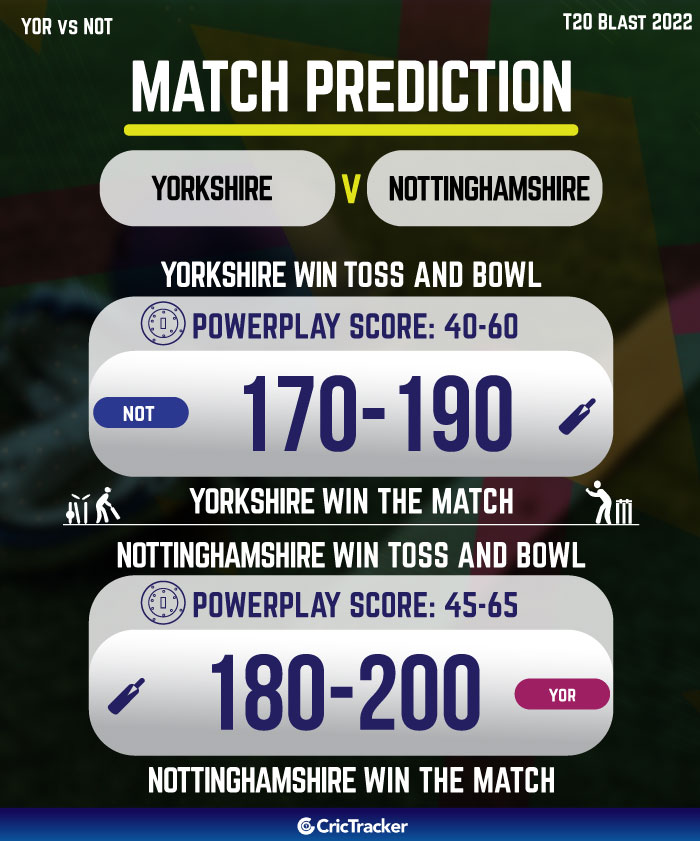