Why Dom Sibley's innings is one for the connoisseurs of Test cricket?

Why Dom Sibley’s innings is one for the connoisseurs of Test cricket?

If you ever needed a case study of how to construct a Test hundred, here was the perfect example. 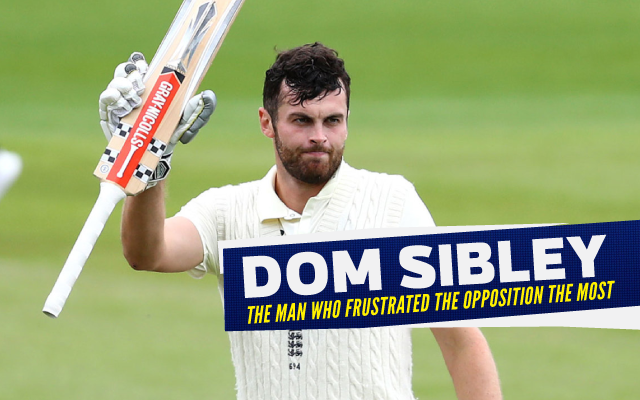 But more than the runs, it was the manner in which Sibley went about his innings that makes it a Test match classic in the modern day cricket.

All the ingredients of a Test classic

Sibley’s innings at the top of the order had all the ingredients of a Test match classic. He was patient, gave the first hour to the bowler and was willing to grind it out in the middle. At the start of his innings when the ball was moving around, he did not commit himself. Yet, when an opportunity presented itself, Dom Sibley did not let it go either.

He was the man who frustrated the opposition the most. As England lost 3 wickets at the other end with just 81 runs on the board, Sibley held one end up, proving to be impenetrable.

The marathon partnership with Ben Stokes

And, he was involved in a colossal partnership of 260 runs for the 4th wicket with Ben Stokes. The right hander allowed his side to dictate terms against the opposition and helped the hosts to finish with a massive first innings total of 469/9.

When Stokes came out early on, Dom Sibley was content in rotating the strike. And slowly, as the former settled in and started opening up, the opener gave him company. The two of them formed a perfect foil to blunt the West Indies bowling attack in an association that lasted almost 100 overs.

After battling for a day and a half in the middle, the opener got to his first Test hundred on home soil. It was a straight drive down the ground that brought up his three figure score. If you ever needed a case study of how to construct a Test hundred, here was the perfect example.

He scored just 5 boundaries in his 372-ball stay. But then, Test cricket is about grit, character and determination. And, Sibley ticked each of those boxes to bring up a very special Test hundred. The scorecard would probably say that Stokes top scored for the side, but in terms of importance and the context in which the innings was played, Sibley’s knock is right up there with the one that Stokes conjured.

One for the future

At the age of 24, Dom Sibley has shown that he is a batsman for the future and it would be wise for England to invest in him in the long run. And, his century couldn’t have come at a better time for his side. The hosts are 0-1 down in the series, and have everything to play for. And, Sibley’s century has set the perfect foundation for England to obtain control of the match.

But more than anything else, Sibley’s knock was a perfect example of how to construct a typical Test innings. If you are a fan of the longest format of the game, Sibley is the man to invest your time on.