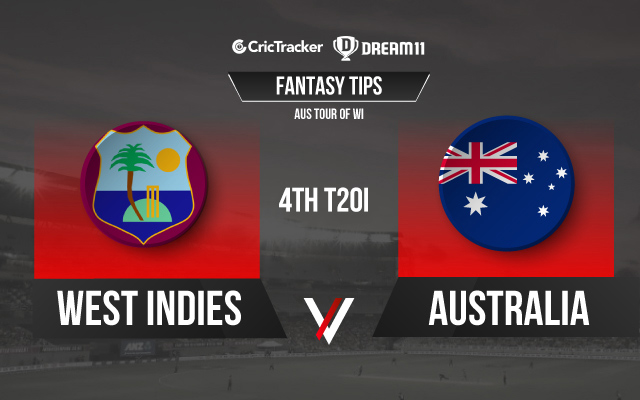 With top-class fielding and bowling performances in the 1st half, and Universe Boss Chris Gayle’s one-man show in the second half, West Indies won the third T20I to seal the series with still two more matches yet to be played. They will definitely push themselves to make it five-nil.

Meanwhile, Australia’s poor run with the bat continued in the 3rd T20I as well, which is a major reason why they have been completely outplayed by the hosts and lost the series. Lack of firepower in the middle has been the area of concern for the visitors in this series. They look to win the remaining two matches to give them at least something to cheer for.

The bowlers should not be predictable in their line and length on this surface. Once the batters are settled, it’s quite difficult to pick up wickets. Overall, it’s a good sporting wicket anything over 160 will be a good score to defend.

Shimron Hetmyer was the player of the match in the 2nd T20I for his exceptional batting. He scored 61 runs from just 36 balls. Overall in two innings so far this series, he has notched 81 runs at a strike rate of 132.78.

Moises Henriques was the top scorer for Australia in the 3rd T20I. He scored 33 runs from 29 balls and gave Australia something to bowl at. In 3 matches in this series, he has scored 68 runs at a strike rate of 117.24.

Dwayne Bravo is a completely different player when he bats higher up the order, and it gives plenty of batting options to the skipper. In 3 matches in this T20I series, he has scored 61 runs, with the highest score of 47*, and has also picked up 2 wickets.

Mitchell Marsh is the leading run-scorer in this series with 114 runs in 3 matches at an average of 38, which includes 2 half-centuries in the first two matches. He has even picked up 3 wickets at an economy of 7.42.

Hayden Walsh has turned out to be the surprise package for West Indies in this series. The 29-year-old leg spinner has scalped the most wickets in this series, with 8 wickets in 3 matches at an impressive economy of 5.83.

Even though Riley Meredith went for plenty of runs in the 3rd T20I, but he got rid of the dangerous trio ofLendl Simmons, Chris Gayle, and Dwayne Bravo. He has great pace and has got good change-ups as well.

Matthew Wade was well set in the 3rd T20I but got out playing a false shot against Obed McCoy, when he batting was on 23 runs. Overall in this series, he has scored 56 runs at a strike rate of 175.

Matthew Wade hasn’t carried his good starts, but has been in good touch. It’s a bit risky to pick him as your fantasy team skipper.

The trailblazer of T20 cricket, Chris Gayle has scored 84 runs in this series. He has maintained an average of nearly 30 and a strike rate of over 130.

Daniel Christian bats at no. 7 and has bowled only 4 overs in this series. Considering this factor, it’s hard to include him in the fantasy eleven.