Lungi Ngidi is a risky captaincy pick for the 2nd Test. 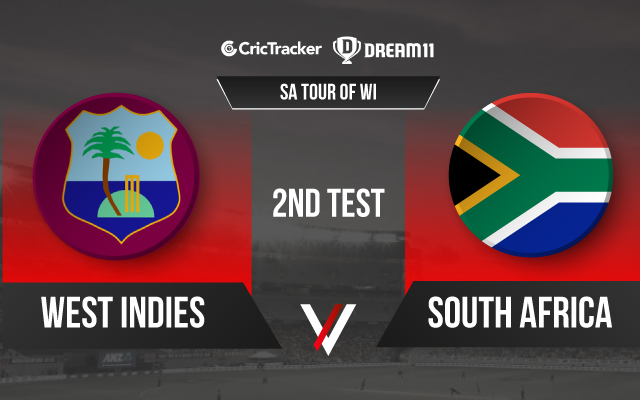 West Indies played horribly in the 1st Test, and as a result, the match ended inside 3 days. They were completely outplayed by the South African fast bowlers and didn’t have any answer against them. The men from the Caribbean must win this match to level the series 1-1.

Meanwhile, South Africa made a great start to the tour where they rattled the West Indies side in the 1st Test and won the match convincingly by an innings and 63 runs. Now, they will look forward to taking the series 2-0. Both the teams have got good quick bowlers and whoever plays well with the bat has more chances of winning this test.

The wicket has got a good bounce and carry. It’s hard to negotiate for the batters against the quick bowlers. It’s a result-orientated game and whoever wins the toss should bowl first.

I don’t think Team India will be too worried over injuries: Inzamam-ul-Haq

Kraigg Brathwaite likes to spend more time at the crease and has the ability to play long. West Indies skipper has scored 4135 runs in 69 Test matches at an average of 33.08, which includes 9 centuries and 21 half-centuries.

Aiden Markram is a stylish batter who often is termed the future of South African cricket. He bought up his 9th Test half-century in the 1st Test, and overall in his Test career, he has scored 1820 runs in 25 Test matches.

Jason Holder doesn’t have too much pace but uses his height to a maximum extent and swings the ball which is hard to pick for the batters. He picked up 4 wickets and scored 24 runs with the bat in the 1st Test.

Roston Chase is the only batter who showed some fight against the South African quicks in the 1st Test. He scored 8 and 62 runs in the 1st and 2nd innings respectively.

Jayden Seales, who was playing in his 1st Test match, picked up 3 crucial wickets just when West Indies were searching for breakthroughs. He can be a great budget pick at 8 Cr.

West Indies batters had no answers against Kagiso Rabada in the 2nd innings. where he picked up 5 wickets. Overall, he scalped 6 wickets in the Test.

Quinton de Kock doesn’t defend too much and plays the shots more effectively in the longest format. He scored unbeaten 141 runs in the 1st innings of the 1st Test. Overall in his Test career, he has scored 3149 runs at an average of 38.87.

Jermaine Blackwood is not in the greatest of form and has scored only 56 runs in the last 3 Test matches. You can take a risk and make him your fantasy skipper.

Lungi Ngidi was the pick of the bowler for South Africa in the 1st Innings of the 1st Test where he picked up 5 wickets. It’s worth a risk and you can pick him as your fantasy team skipper.

Wiaan Mulder is slightly inexperienced at this level and the chances of him securing more points are very less. Considering these factors, you can avoid him while making your fantasy teams.