West Indies managed to win the T20I series against Sri Lanka 2-1 after a solitary blemish in the second game where they lost by 43 runs. However, ODI cricket is a whole different ballgame and the Caribbean team has had its travails over the past few years. Their opening ODI against the Lankans is scheduled to take place on March 10 at the Sir Vivian Richards Stadium, North Sound, Antigua.

In the ICC rankings, both teams are lagging behind to a significant extent. Though West Indies can be deemed as the favourites, the Lankans can’t be undermined due to their strong bowling unit, especially in the spin department. Back in 2020, Sri Lanka beat the West Indies 3-0 in the ODI series. However, the fact that the home team has some power-hitting makes them a strong side as well.

The venue has hosted 17 ODIs out of which 10 were won by the team, batting first. Hence, chasing can be avoided. The average score at the ground is around 250 and a fairly high-scoring game can be expected. There will be a 20 percent chance of rain and the temperature will be around 26 degrees Celsius.

Playing Combinations for WI vs SL

Shai Hope has been a fulcrum of the Caribbean batting lineup for quite a few years now. In 78 ODIs, the right-hander has notched 3,289 runs at an average and strike-rate of 52.20 and 74.37 respectively. Against the Lankans, Hope averages 52.50, scoring 315 runs from six games with a century to his name.

Wanindu Hasaranga has come up the ranks in the last one and half years. In the recent T20I series, he ended as the leading wicket-taker with eight scalps. Most crucially, he had an economy under four, keeping a check on the batters. Not to forget that the 23-year-old can also wield the willow to good effect. 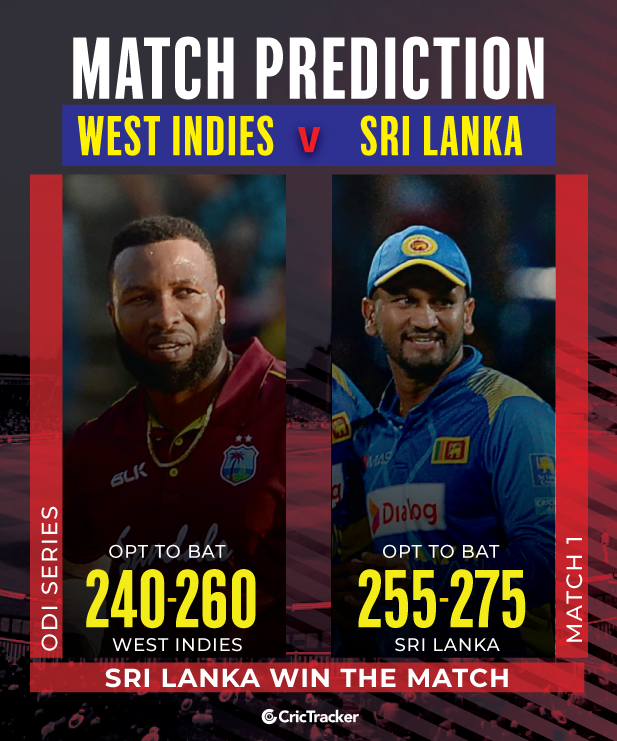