The humidity levels will be extremely high during the match time.

Jonny Bairstow stood tall between England’s win and defeat when the Three Lions played the Windies in the first T20I in St Lucia. The opener, though, was successful enough to play an impactful inning and help his team get over the line. Thus, England, led by Eoin Morgan, got an all-important 1-0 lead in the three-match series.

They will be trying to push hard for another win in the upcoming game in St Kitts so that they can seal the series. Ending this highly competitive series will be a priority for the visitors. However, beating a team like Windies twice in a row at their home in the T20 format won’t be easy. The hosts will, in all possibility, give in their everything to level the series.

The humidity levels will be extremely high during the match time. Thus, the moisture in the air might quicken the pitch up slightly. The ball should ideally come onto the bat nicely and it could be a high-scoring affair. There is no prediction of any rain-interruption during the match.

Chris Gayle will open the innings alongside the ever-reliable Shai Hope. The middle-order boasts of some big strikers of the cricket ball. Shimron Hetmyer, Darren Bravo and Nicholas Pooran will look light up the Darren Sammy National Cricket Stadium with some massive shots. Carlos Brathwaite, Fabian Allen, Jason Holder, and Ashley Nurse will be the all-rounders while Sheldon Cottrell and Oshane Thomas will be the two bowlers in the side.

For England, Alex Hales will open alongside Jonny Bairstow. Dawid Malan could forge into the eleven and Joe Root will have to make way for him. Eoin Morgan, Joe Denly and Sam Billings will have crucial roles to play in the middle-order. With the ball, Tom Curran, Chris Jordan, and Adil Rashid will be important.

The Windies are predicted to win the match. 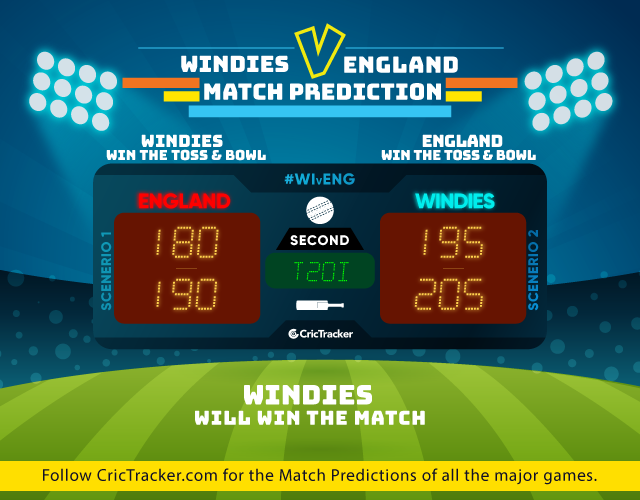