Resurgent Windies will definitely want to avoid a series defeat after fighting so hard.

The mind-boggling run fest is about to come to an end as England and Windies will be playing the final ODI of this outstanding series on Saturday. While the whole focus has remained over the number of runs scored in the series, the likes of Adil Rashid and Mark Wood are proving wickets at crucial moments still matter more than the runs they concede.

Both teams have been attempting to out-muscle and outscore each other this series and if the Windies manage to win the final battle, it could rather be a fair result for what has been a hard-fought battle. Nevertheless, it’s difficult to predict with such high-quality present on either side.

Eoin Morgan and company will be taking numerous positives out of this tour, especially from the batting department. As all the sides prepare for the World Cup, which is less than three months away from commencement, this will be a huge test of character for England and Windies, especially the latter.

The 5th and final game of the 5-match ODI series between Windies and England will be hosted by the Daren Sammy National Cricket Stadium, Gros Islet, St Lucia.

Going by how the series has panned out, it will be another nightmare of a day for the bowlers, who conceded in excess of 800 runs in the previous match. Weather reports suggest it might not be as hot and humid as it has been in St. Lucia over the last few weeks, which should encourage the visiting team.

Andre Russell could come in forDevendraBishoo or John Campbell with Shai Hope opening. 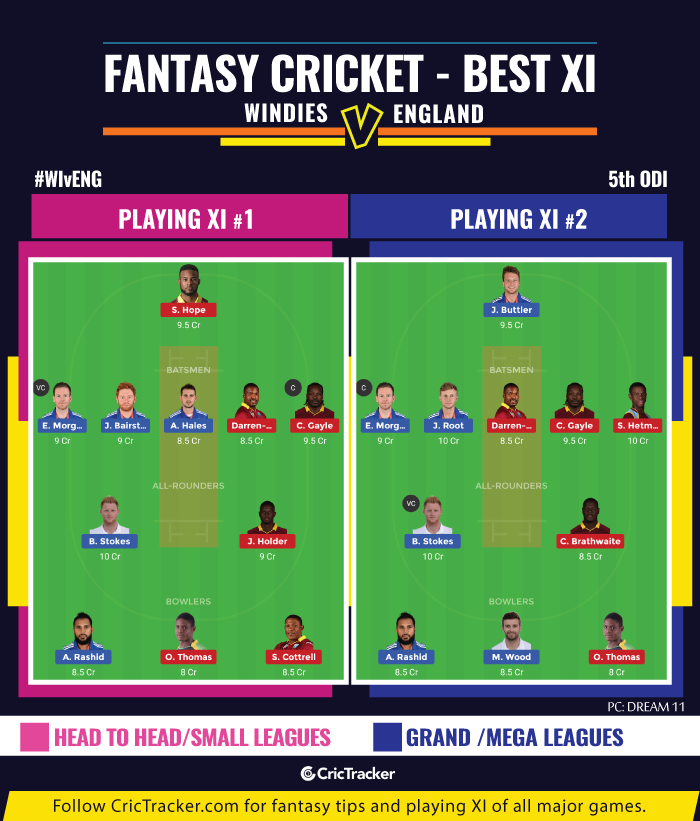 Taking his recent form into account, Jos Buttler as a captain or vice-captain could be a gamble worth taking.

England are expected to win this game and register a 3-1 series win.