The English won't retreat so easily and will definitely ask for something much better from the Windies to win the series.

No one expected the Windies to come back with such a strong performance in the second ODI and maybe they would’ve continued their good run if the rain gods had not forfeited the third ODI. It really feels like a carnival when the Windies are on song and right now, it indeed is a festive atmosphere in the Caribbean lands with the team getting back on track, exactly at the right time.

England were caught cold in the run chase with Sheldon Cottrell returning with five wickets. It was a difficult outing for the English batsmen, who failed to chase 290-odd runs after successfully gunning down 364 runs in the previous game.

The English won’t retreat so easily and will definitely ask for something much better from the Windies to win the series. This encounter holds paramount importance as the one who wins this will definitely not lose the series. While there’s no denying Windies are back in touch, the visiting team will still be a huge force to combat with.

The outfield might be a little slow considering how much it has been raining in Grenada. The pitch too might be on the slower side if there’s no sunshine. Weather forecasts say that there is a good chance of rain gods interrupting play.

Universe Boss Chris Gayle will open the innings alongside John Campbell, with the usual suspects Shai Hope, Shimron Hetmyer, Carlos Brathwaite and Jason Holder coming in the middle order. Holder and Oshane Thomas will be their key bowlers with Sheldon Cottrell coming in the middle overs. Andre Russell is back in the squad and he walks back into the XI.

Adil Rashid is the other bowling option for the captain. Stokes’ fitness is in doubt and if he fails to recover, then Alex Hales is the favourite candidate to replace him.

The prediction is for England to win in a thrilling encounter. 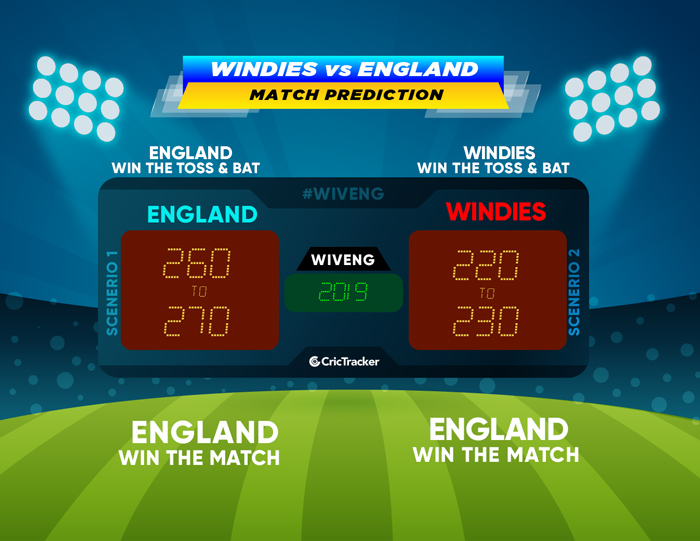