After scoring over 800 runs in aggregate in the previous game, it will be interesting to see what's left in the tanks of both these sides.

Just another game left in what has turned out to be a memorable ODI series between England and Windies, but the stakes are ever so high for the final game which will be played at St. Lucia. After scoring over 800 runs in aggregate in the previous game, it will be interesting to see what’s left in the tanks of both these sides.

England would be itching to win the series after the humiliating Test series defeat. It could also be a huge statement with the World Cup less than three months from commencement. Their batsmen have been scoring runs for fun and their bowlers, despite conceding runs aplenty, are picking wickets at a crucial juncture.

All’s well for the visiting nation and on the other side, things are just falling into place nicely for Windies. They have been toyed in recent years by most teams, but this revitalizing performance from them came in as a huge sigh of relief for everyone who were concerned with their downfall.

Another cracker-jacker of a wicket is expected for batsmen with the bowlers getting themselves ready for another round of hammering. The weather is expected to remain a bit on the cooler side with some clouds hovering around the stadium.

The latest entrant into the 10,000 club Chris Gayle and John Campbell will open the innings with Shai Hope coming at number 3. Darren Bravo, Shimron Hetmyer, Ashley Nurse, Jason Holder and Carlos Brathwaite will form the middle order. Sheldon Cottrell and Oshane Thomas will share the fast bowling responsibilities with skipper Holder with Nurse and Bishoo being the spinning options.

Jonny Bairstow and Jason Roy will open for England with Alex Hales continuing at number 3. Joe Root, Eoin Morgan, Jos Buttler and Moeen Ali will be taking care of the middle order with some decent strikers like Tom Curran and Plunkett available in the lower order. Mark Wood was exceptional in the previous game and would want to continue his prowess alongside Plunkett, Curran and their lone spinner Adil Rashid.

The prediction is for England to win the game and triumph 3-1 in the series. 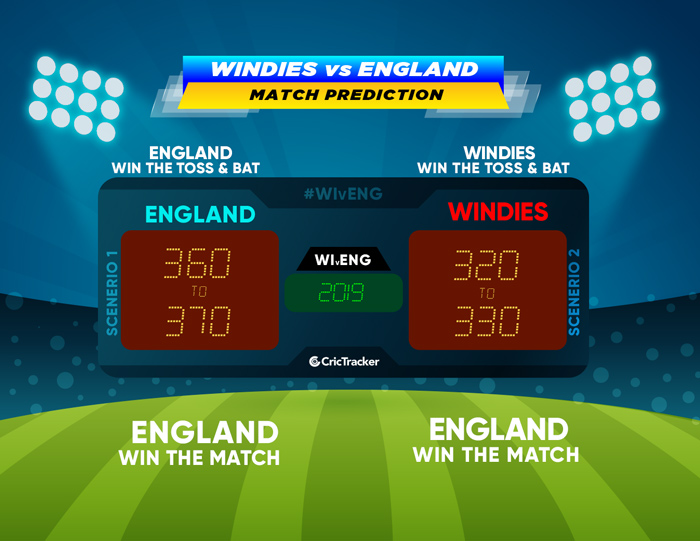