The new ball is likely to swing which makes Ellyse Perry who opens the bowling, is very crucial as she can pick early wickets.

The 19th match of the Women’s National Cricket League (WNCL) 2019-20 will be played between Tasmania Women and Victoria Women at the TCA Ground in Hobart.

Tasmania and Victoria Women will lock horns in a crucial game of the ongoing WNCL season in Australia. Tasmania are in desperate need of a victory as they have won only two matches out of five and stand fifth in the table with only nine points to their name. Victoria are fourth with 13 points and have won a game more than their counterparts.

Moreover, Victoria Women also have an advantage of beating Tasmania in the previous game itself. They chased down 199 without much fuss thanks to an all-round show from Sophie Molineux (80 runs and 3/33). Nicola Carey (73) was the only shining light for Tasmania with the bat and she will hope other batters’ support in this game.

The forecast in Hobart is not at all encouraging with the rain expected to fall overnight and during the match time as well. Heavy showers are predicted from 9 AM local time and the conditions will remain cloudy although the rain will stop in the afternoon. The game will either be a shortened one or it will be a washout.

In the only match played at the TCA Ground this season, the chasing team gunned down the target 199 runs easily. With the rain around, the team winning the toss is expected to bowl first. The pacers will most likely get considerable help from the pitch thanks to the conditions.

Average first innings score: 198 (Only game played at the venue this season)

For Tasmania, Nicola Carey is in great form with the bat as she scored 73 runs with the bat and also bowled nine overs picking a wicket. Even Meg Phillips opens the innings and delivers with the ball. Apart from her 30 runs, she picked three wickets. Though Gibson didn’t pick up a wicket in the previous match, she is a decent bowler and has nine wickets to their name in five innings.

The Victoria Women have the likes of Ellyse Perry, Meg Lanning in their line-up who should be picked irrespective of their form and their performance in the previous match. Sophie Molineux is another such player who is coming into this match after scoring 80 runs and picking three wickets. Molly Strano also picked a couple of wickets while Elyse Villani is also in decent form with the bat opening the innings and can be picked in your Dream11 Fantasy side. 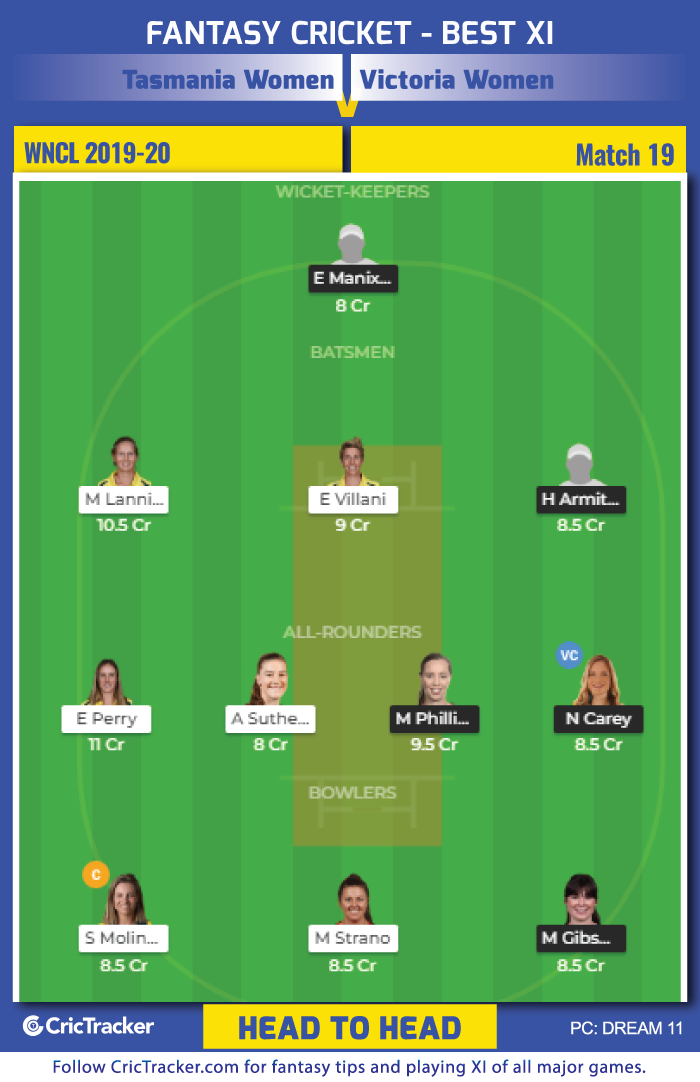 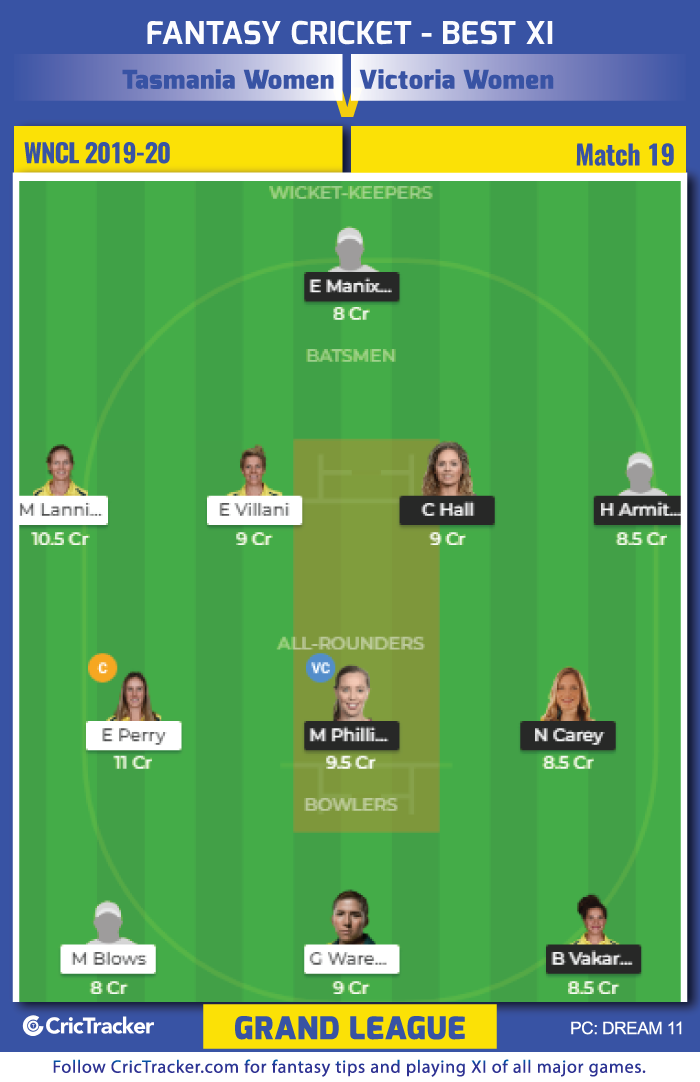 The new ball is likely to swing which makes Ellyse Perry who opens the bowling, very crucial as she can pick early wickets. She also bats at four and is a very good captain material for this match in Dream11 Fantasy.

Victoria Women are expected to win this match.