Alyssa Healy, Ashleigh Gardner and Rachel Haynes are on national duty with the tri-nation series in progress and they will not play this match.

The 22nd match of the Women’s National Cricket League (WNCL) 2019-20 will be played between New South Wales (NSW) Women and Tasmania Women at the North Sydney Oval No.1 in North Sydney.

The New South Wales Women will face the Tasmania Women in the match 22 of the ongoing WNCL season in Australia. The NSW are at the top of the points table and have more or less sealed their place in the final which is set to take place on February 16. They have won five out of six matches so far and their only loss came against Victoria.

Tasmania Tigers, on the other hand, have struggled throughout their campaign. They have managed to win only two matches in six attempts and are at the fifth position with nine points to their name. They are almost out of the race to make it to the finals and will be looking to put up a decent show. They are coming off two losses against Victoria and are facing the NSW for the first time this season.

It will be a cloudy day in North Sydney on Thursday. However, the rain is not likely to play the spoilsport with the temperature expected to hover in the early 20s according to AccuWeather.

This is the first match of the season at the venue. There is not much information about the behaviour of the surface at the North Sydney Oval No.1. Though historically it has hosted some high-scoring matches as it is also smallish in size.

Rachel Haynes, Ashleigh Gardner and Alyssa Healy are on national duty and won’t be part of this match. NSW have named three potential debutants in Hannah Darlington, Maddy Darke and Anika Learoyd in their 13-member squad for the next two matches.

Nicola Carey of Tasmania is on national duty and might not be available for this game. Her replacement is not yet named.

Tahlia Wilson has been the highest run-getter for NSW this season. She has scored 214 runs in six innings at an average of 53.50 and three half-centuries. Apart from her, Phoebe Litchfield (162 runs) and Naomi Stalenberg (148 runs) have been performing decently with the bat. Hannah Darlington is an exciting addition to the NSW squad. She bats in the middle order and also bowls well.

She picked eight wickets in her last three matches which she played in New Zealand Cricket Women’s T20 tournament last month. Rene Farrell (13 wickets) and Hayley Silver-Holmes (10 wickets) are the top bowlers for the team. These players should be picked in your Dream11 Fantasy team.

For Tasmania, Meg Phillips should be one of your top picks. She has scored 137 runs in six outings opening the innings and has picked eight wickets with the ball as well. The skipper Corinne Hall (199 runs in six inns) is another consistent performer for the team. Belinda Wakarewa (5 wickets) and Maisy Gibson (9 wickets) will be key bowlers for the team. 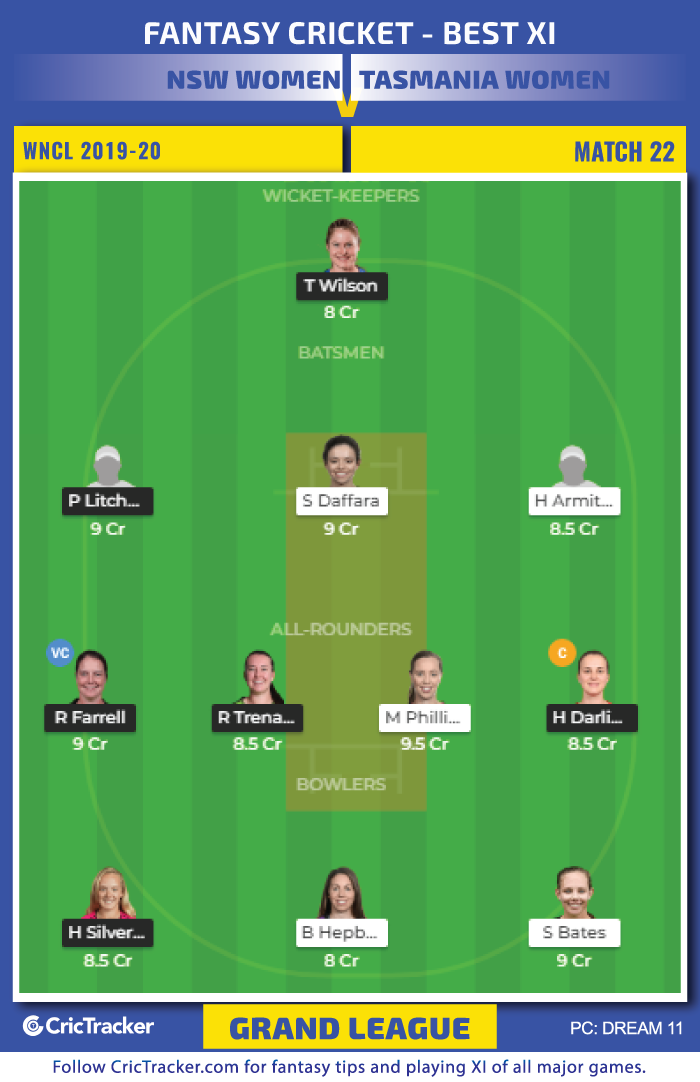 Most of the users have picked the likes of Healy, Gardner, Haynes and Carey in their Dream11 Fantasy team. Do not pick them in your team.