Bridget Patterson has so far mustered 288 runs in her seven outings and she will look to replicate her influential form in the upcoming game as well.

The 28th match of the Women’s National Cricket League (WNCL) 2019-20 will be played between Queensland Women and South Australian Scorpions Women at the Allan Border Field in Brisbane.

Queensland has regained their form in WNCL 2020, who is currently ranked third in the points table. They will look to win their upcoming match to keep themselves in contention to qualify for the finals of the tournament. They will bank on their in-form batter Elyse Villani, Tess Flintoff, who have done convincingly well for their side. Meanwhile, their bowling looks pretty much settle that comprises of Grace Harris, and Mikayla Hinkley. And, Queensland will go all-out against Scorpions to grab their spot for the finals.

Scorpions had a poor season due to the woeful performances of their players in every department. They must be confident after finally winning their first game of the series. South Australia defeated Victoria Women chasing down 192 runs with one over and three wickets to spare.  They have already been knocked out from the tournament but they will have an opportunity to end their campaign on a high note.

It will be a cloudy day with chances of a thunderstorm on the match day. There are chances that it might affect the length of the match with the wind blowing at a rate of 11 to 17 km/hr. The temperature is expected to deviate between 22 and 26 Degree Celsius throughout the day according to Accuweather.

The track at Allan Border Field is expected to offer a good battle between the bat and ball. In the previous game, the teams found it quite difficult to face the fast bowlers, who were getting some help from the wicket in overcast conditions. The same is expected in the upcoming match. Moreover, the side chasing at this venue will have a big chance of winning the encounter as per the trends of this ground.

Average first innings score: 204 (In the previous season of WNCL)

Elyse Villani will play a vital role in the fantasy team as she is scoring runs with great consistency. So far she has amassed 300 runs in eight games. Sammy-Jo Johnson is also an important player to be picked in any fantasy teams as she has grabbed 11 wickets in seven outings. Tahlia McGrath has scalped 13 wickets in seven games for her team, she should not be ignored while picking a fantasy team. Bridget Patterson has so far mustered 288 runs in her seven outings and she will look to replicate her influential form in the upcoming game as well. 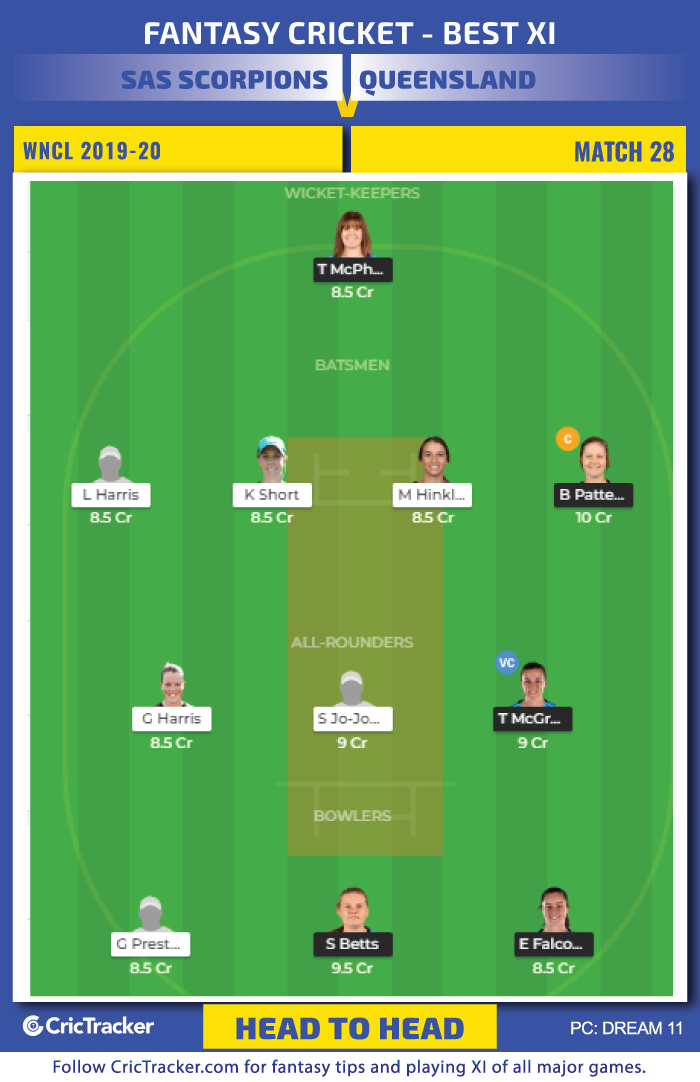 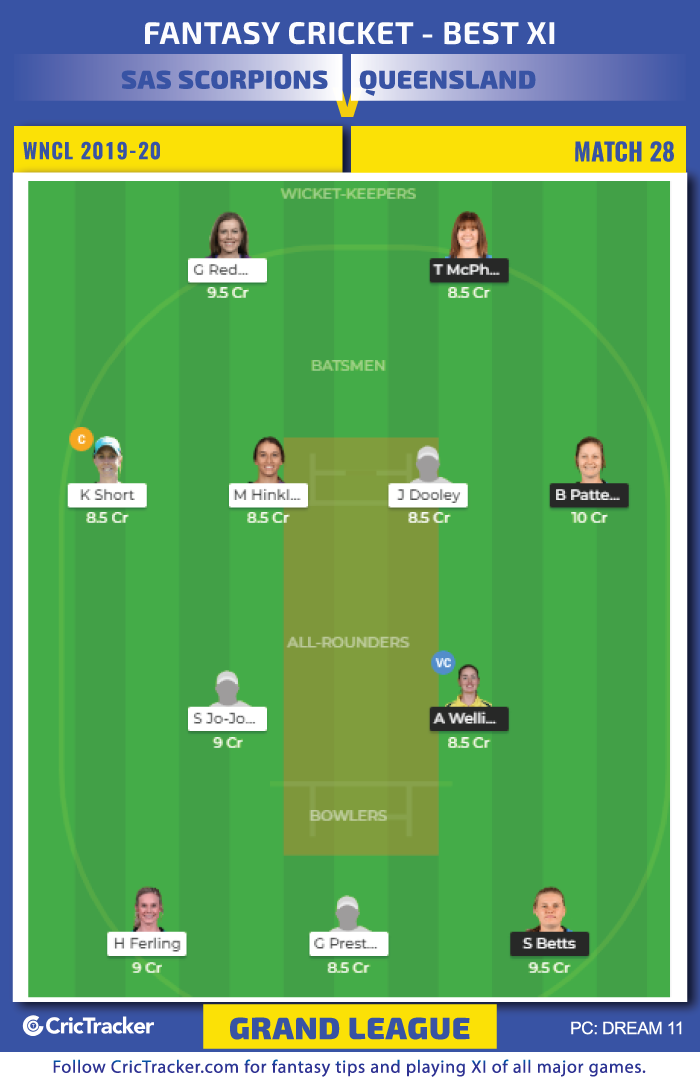 South Australia are expected to win against Queensland due to the presence of their top in-form players. The users can go with a combination of one wicketkeeper, five batters, two all-rounders and three bowlers including one spinner.

The users might find a problem with the credits, so take a wise decision while picking your Dream11 Fantasy team. We have left Elyse Villani to rope three all-rounders in the fantasy team, who can contribute well with the bat and ball.

South Australia Women are expected to win this match.