Sammy Jo Johnson will be a safe option as captain or vice-captain.

The 5th match of the Women’s National Cricket League (WNCL) 2019/20 will be played between Queensland Women and Tasmania Women at the Souths District Cricket Club in Brisbane, Queensland.

Queensland Women will host Tasmania Women in the last of the two matches for both teams in the first round of the WNCL 2019-20 campaign. Both the teams began the tournament with a defeat against the Western Australia Women; both the matches played at the South District Cricket Club. This venue in Brisbane will be hosting the two sides that suffered defeats in the hands of Queensland.

Queensland’s top-order crumbled in the opening game of the tournament. Jemma Barsby rescued the team from 104/8 by scoring a 70-ball 63. Her effort could only push the hosts to 189/10 which wasn’t enough for a win. Later on Sunday, the Tasmania Women fell 17 runs short of the 195-run target. Corinne Hall fought till the end for Tasmania with a 55-run knock before being the 9th wicket to fall.

For the 3rd time in as many days, the Souths District Cricket Club is expected to have clear weather without any threat from the rain.

Twice in two days, the Souths District Cricket Club saw the fall of wickets in the initial overs of the match as it starts at 9:30 AM local time. The spinners dominated later on and the same is could be seen on Monday. Chasing down targets under 200 is possible for the teams batting second here.

Corinne Hall averaged 60.25 in 2018/19 WNCL with the bat and started this edition with a fifty. Meg Phillips opening with the bat adds on to her fantasy potential of being a consistent wicket-taker. Jemma Barsby might not get a chance to bat up the order but showed her potential scoring fifty in the first match. Georgia Redmayne will have a crucial role to play in the Queensland line-up. He scored 488 runs in 12 innings across last two WNCLs.

Sammy Jo Johnson will be a safe option as captain or vice-captain. She started the season with a big knock and could be seen bowling few overs of off-spin on a used surface. 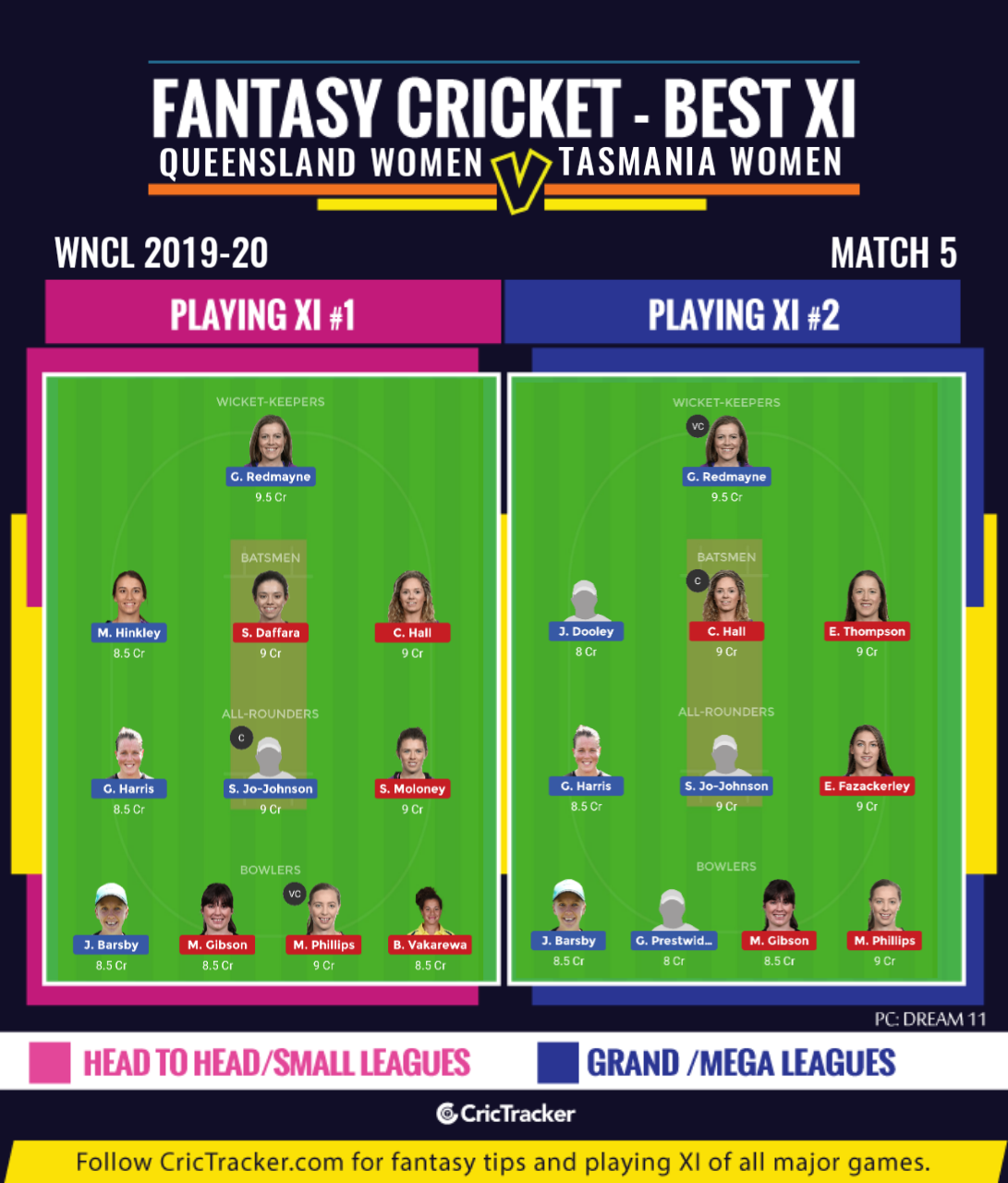 Considering the batting position and overs bowled, we excluded Erin Fazackerley from our Suggested XI No.1. In the 2nd team, a little risk was made by excluding Sasha Moloney.

Queensland Women are expected to finish the first round with a win.