Chamari Athapaththu, in all likelihood, should open the batting for the Renegades and should also roll her arm over for a couple of overs.

The defending champions, Brisbane Heat look to go one step further in defending their crown as they face Melbourne Renegades at the Allan Border Field. Brisbane Heat has set the pace this year in the league phase with ten wins from fourteen games. Riding on the performances of Beth Mooney and Jess Jonassen, the Heat also won the rights to host WBBL Finals day as well. In spite of their growing credentials, their recent loss came against Melbourne Renegades itself.

At this very venue, Renegades pulled off a magnificent chase although Danielle Wyatt and Tammy Beaumont aren’t available for this game. Owing to their superior talent on paper, Brisbane Heat will fancy its chances of yet another appearance in a WBBL Final. Nevertheless, Renegades should prove to be a viable competitor with the likes of Duffin and Strano capable of upsetting the apple cart for the Heat.

A sunny day beckons with the temperature hovering around 35 degrees Celsius. While there isn’t a chance of rainfall, the conditions should remain the same throughout the game. There is a wind expected to blow in at 18 km/h with a cloud cover of 20% at the start of the game as well.

While the average first innings score might read 142, a decent batting track is on offer in Brisbane. The previous game between these sides at the Allan Border Field saw the Renegades chase down 183. With this being the second match of the day, it could be a touch slower with some swing on offer as well for the pacers early on.

Danielle Wyatt has left for national duty and will not be a part of WBBL Finals.

Beth Mooney’s tally of 672 runs this year is second only to Sophie Devine. She has been striking at 126.55 and also boasts of a great record at the Allan Border Field. Her team-mate, Jess Jonassen has been sensational with bat and ball this year. While her bowling has been at par with her usual standards, it is her batting performances that have turned a few heads. With 348 runs and 19 wickets, Jonassen has won four player-of-the-match awards this season.

While the Renegades did oversee the batting prowess of Danielle Wyatt come to the fore, Jess Duffin was arguably their most important player. Featuring in the middle order, Duffin has 500 runs to her name with a formidable strike rate of 140. 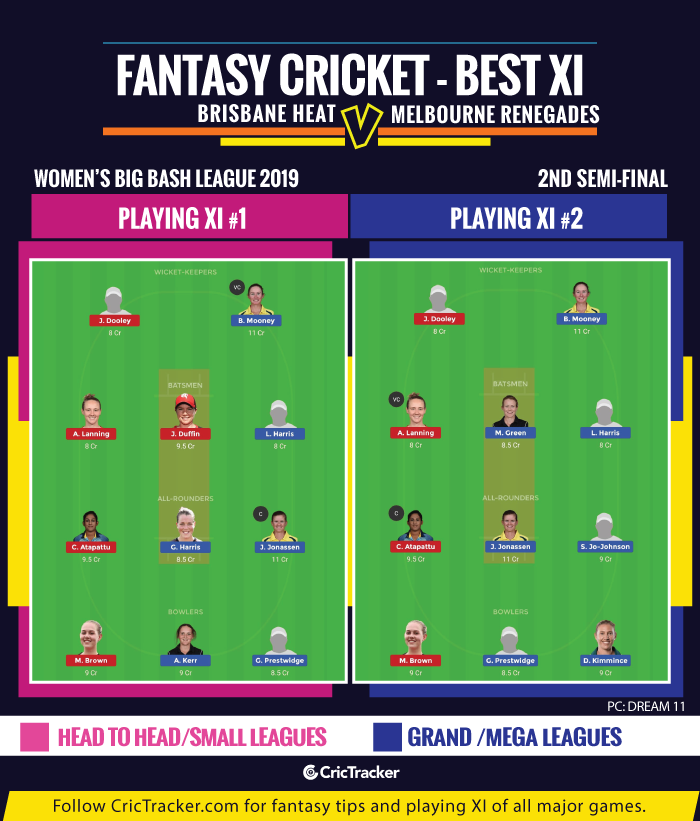 Top-order batters will be crucial considering the nature of the pitch. This would render the selections of Josephine Dooley and Maddy Green as viable picks, considering they are available for 8 and 8.5 credits only.

Chamari Athapaththu, in all likelihood, should open the batting for the Renegades and should also roll her arm over for a couple of overs. Picking her would be a dependable option given the departures of Beaumont and Wyatt from the Renegades roster.

Brisbane Heat are favourites to win this encounter.