Dane Van Niekerk is available for Sydney Sixers from this game.

The 10th match of the 2019 Women’s Big Bash League (WBBL) will be played between Sydney Sixers and Melbourne Stars at the Hurstville Oval in Sydney.

Melbourne Stars had a tough start to the tournament losing both their matches against the Hobart Hurricanes during the last weekend at the Junction Oval. The Stars suffered a 20-run loss and a 5-wicket defeat in those two matches. They will now face an even better opponent in the form of Sydney Sixers. The team led by Ellyse Perry has become even stronger as Dane van Niekerk recovered from an injury.

The Sixers started the season with a win and a defeat; both by big margins. They started off this season with a big total which helped them to defeat the Sydney Thunder by 49 runs. Sixers got the taste of their own medicine when the met the last year’s champions Brisbane Heat. Sixers were bundled out for just 73 runs chasing a target of 166 as they lost their last six wickets for one solitary run.

Most part of Saturday is expected to be clear at the Hurstville and no rain is expected during the game.

The Hurstville Oval in Sydney is considered as the highest scoring venue of the WBBL. The venue witnessed some of the high scoring matches in the competition and that has been the reason. The results of chasing teams are mostly inflicted by Sydney Sixers’ quality. The venue is perfect for chasing especially in the afternoon.

Elyse Villani is looking for a big score to get things going. Holly Ferling replaced Annabel Sutherland in the squad of the Stars. She has a good record with the ball in WBBL. The likes of Hayley Silver-Holmes and Sarah Aley will be crucial in filling the team due to the presence of players with 9.5+ credits.

No one else is a better option as captain or vice-captain than Ellyse Perry in the WBBL. 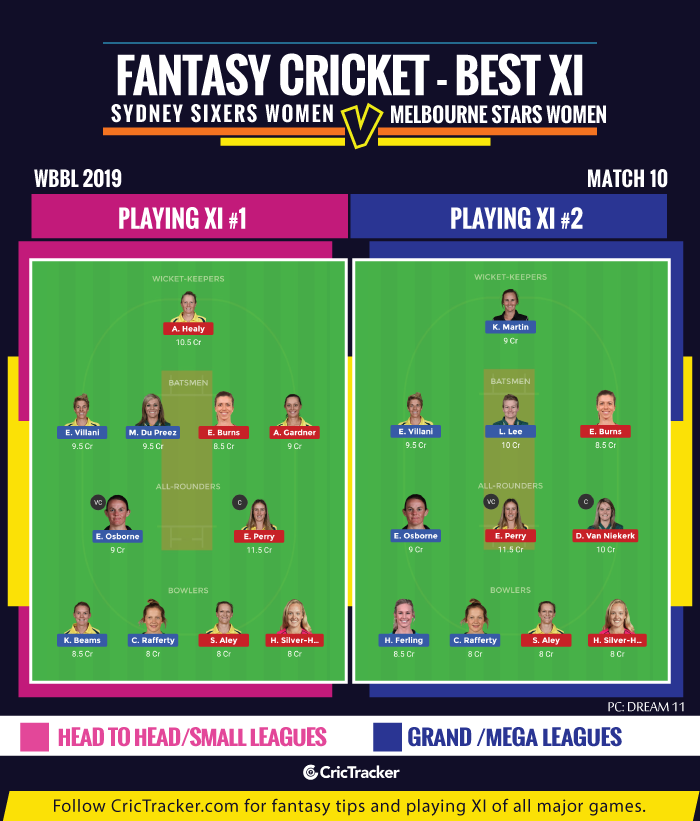 With the return of Dane Van Niekerk, the fantasy selection becomes tough as she costs 10 credits. Managing players will be key to pick Van Niekerk. She can’t be ignored on the basis of the injury break. She went into KSL without playing any professional cricket and stood as the MVP of the Surrey Stars.

The Sydney Sixers are expected to edge past the Melbourne Stars.